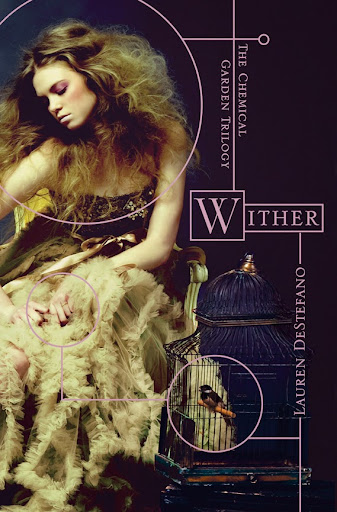 WHAT IF YOU KNEW EXACTLY WHEN YOU WOULD DIE?

When sixteen-year-old Rhine Ellery is taken by the Gatherers to become a bride, she enters a world of wealth and privilege. Despite her husband Linden’s genuine love for her, and a tenuous trust among her sister wives, Rhine has one purpose: to escape – to find her twin brother and go home.

But Rhine has more to content with than losing her freedom. Linden’s eccentric father is bent on finding an antidote to the genetic virus that is getting closer to taking her son, even if it means collecting corpses in order to test his experiments. With the help of Gabriel, a servant she is growing dangerously attracted to, Rhine attempts to break free, in the limited time she has left.

I’d never really heard of this book until I read quite a few reviews of it in the bloggosphere and on Goodreads, most of them quite glowing. So, I decided to check out the summary on Goodreads, liked the sound of it and placed it on my TBR list. I didn’t really look out for it in any book shops that I went into, but I came across a hardback copy in The Works for the amazing price of…. £2.99! Bargain! I asked my dad if I could have it, he said yes and I started to read the night of purchase.

WARNING! SPOILERS!
I really enjoyed this book, the plot moves quite slowly but it is easy to get into because most of the characters are easily likeable. The one thing that I (and a lot of others) have picked up on is the world-building. The world-building is so poor. In the world of Wither, only North America exists and every other continent has dropped into the sea. Why only North America? Surely other countries or even islands exist somewhere. It seems a bit odd to me that only Americans exist in this world and that a large proportion of the population is incredibly rich and leaves the rest to live on the street and live in fear of their sisters being taken away from them or left rotting in a drain.

Another thing that I thought about; the kitchen staff of the Ashby’s mansion are able to eat whatever they want. Where are the ingredients grown? Especially the ingredients for sugary foods. To my knowledge, sugarcane isn’t grown in North America because the climate isn’t right for sugarcane to grow. Where do these tropical crops come from? Do they magically appear or are they genetically modified? And speaking of genetic modification? Where did the money for genetic science laboratories come from? I know that the USA is probably the richest country in the world, but there probably isn’t enough money to modify the genes of everyone and there still be money left.

Probably the biggest strength of this book is the characters, they were very easy to like. However, despite their likeability, it’s quite hard to empathise with them because you can’t really put yourself in the shoes of someone who has been kidnapped, forced into a polygamous marriage and isn’t allowed outside.

There was something about Rhine and Gabriel’s relationship that felt a bit off to me. There were no sparks flying between them, it was as if Rhine only liked Gabriel because he knew about the same things as her and she thought that she “loved” him. It felt as if they weren’t destined to be together since their chemistry wasn’t so good.

I felt a bit sorry for Linden, as the mansion is the only world that he knows and he is pretty much his father’s pawn. From the mention of his surname, I imagined him to look like the actor Linden Ashby. However, the description of him is absolutely nothing like the actor as the Linden Ashby in the book is said to have curly hair and is quite skinny, whereas the actor is a martial artist. Linden seemed to have a childlike innocence about him, he believes everything his father tells him and thinks that he has to marry these three girls and procreate in order to help his father find an antidote.

There is one character in this book that I did not like at all. And that was Cecily. She was so annoying that I wanted to jump into the book and organise a surgery to have her vocal chords taken out. Nearly everything she said was annoying and that became even worse when she fell pregnant. What she does near the end really took the cake for me and I nearly began to detest her. She does redeem herself though. I’m not an expert on babies (I have a strong distaste for babies, actually) but she didn’t seem like a good mother to me. She was more needy than the baby himself and the amounts of time she said “I just want him to know that I’m his mother” made me want to shake that ridiculous want out of her.

The main idea of the book is a bit disturbing. The whole thought of knowing that you’re going to die young because of a genetic disaster would be quite scary. The whole forced polygamy and impregnating was disturbing to the point that I actually physically pulled faces while reading, sounds weird but I do this if something makes me feel uneasy.

Even though the pace of the novel is quite slow, I was mainly captivated by the beauty of DeStefano’s writing style. The narrative is written in the present tense (I’m a stickler for tenses) and the way it moves along makes you feel like it’s happening right as you’re reading. However, I didn’t feel like there was enough tension. There wasn’t a single moment that made my heart jump into my throat or had me gripping the edges of the book.

Overall, this was an enjoyable read. It has it’s flaws and I wouldn’t call it perfect. I think that DeStefano could have done a bit more research on how this world would have worked and made sense, hopefully it will be explained in more detail in the next book, which I am looking forward to!