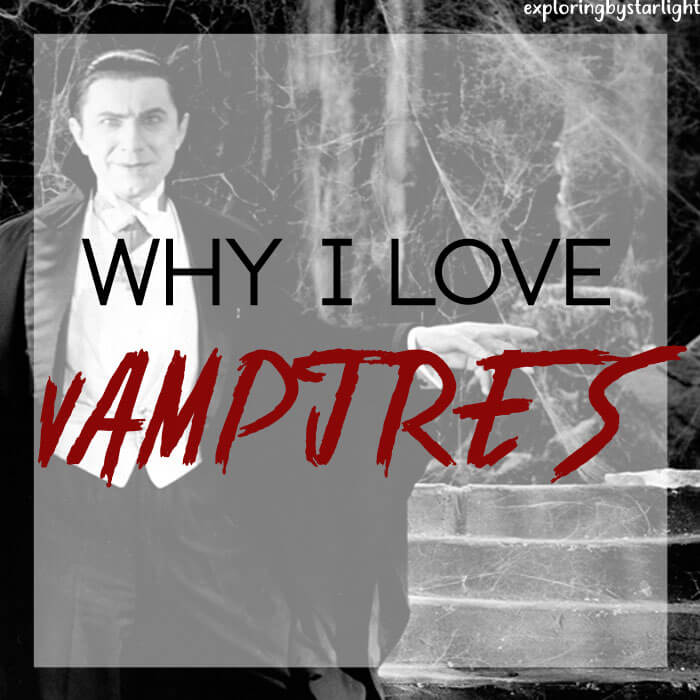 In my incredibly honest and right opinion, vampires are just the coolest, best things ever. Ever. Werewolves? Boring. Ghosts? Nah. Frankenstein’s Monster? He’s just an overgrown baby, let’s be real. (no really. read the book, he’s like an overgrown child.) Very few other monsters have caught my attention quite like vampires have and very few of them have become a full-blown obsession. Well, maybe aliens but I’m nowhere near as obsessed with aliens as some people are.

Today I wanted to explain as best I can exactly why I love vampires so much instead of just saying “vampires are cool” and leaving it at that. Plus, I just finished writing a 16,000-word dissertation on vampires for my Master’s degree (which i finally handed in yesterday) so obviously, my brain is still stuck in vampire mode. My brain is always stuck in vampire mode, just this time more than usual.

Let me tell you about literary academics: they hate things that are popular, love things that aren’t as popular, and absolutely adore folklore. Really. If it comes from mythology or folklore then it’s an absolute treasure because a  lot of academics (or just people in general) really subscribe to the idea that if something is new it is immediate garbage. The reason why I’m mentioning folklore is that when a folklore comes from your own culture, you can twist it and turn it however you want because it’s a free world to some certain extents. And besides, usually when a folkloric creature has spread to almost every single cuslture in the world and is still going strong since ancient times, you’ve got yourself a pretty damn good monster.

This is exactly what my Master’s dissertation was about. The vampire is more than just a scary monster, it can be a metaphor and be a manifestation of what we as a society are anxious about. Sometimes they show us the changes there are in the world. They can be symbols of racism, of imperialism, of fears of overt sexuality, of anti-Semitism, anything. And those are just the readings of Dracula that I’ve found. Vampires can be literal examples of the bourgeoisie “eating” the poor and leaving them to die. Or it could just be, y’know, a sexual thing. If you’re boring, that is. honest opinion time, tho: to me, the laziest way to analyse something is to just claim that everything stands for either sex, drugs, or death. there’s much more than life than those three things.

I argue this point to almost every single person who will listen to me talk about vampires: vampires are not overdone. If you think that they’re overdone than you’re only seeing the same story over and over again. Vampires are incredibly versatile creatures; you can do anything with them as long as they’re dead people who drink blood. You can make a vampire almost indestructible because there are so many different ways to play around with the lore. The rules aren’t rigid. And yes, this is the part where I defend Twilight. Is the idea of vampires sparkling silly? Yes. Does that mean that the characters aren’t vampires? Absolutely not. The whole idea of vampires not being able to be exposed to even the tiniest bit of sunlight is relatively new when you consider how long vampires have been a part of popular culture. This was first introduced in the movie Nosferatu, which was released in the 1920s. Dracula could walk around in broad daylight no problem, he just couldn’t use his powers. However, what I think there is to consider is that even though Twilight was this huge thing in the late 2000s, it won’t change what is accepted as vampire lore forever because parts of it were rejected so much. Again, you can make a monster however you want. It’s your monster and there are no rules.
<

Believe me, yes they can. Obviously, this depends on the kind of vampire in question, but I definitely know that I would not want a Nosferatu-type vampire anywhere near me. No thank you. If it looks like an animal, I don’t want anything to do with it. I’m not actually scared of blood, but that doesn’t mean that I don’t like having it taken out of me for whatever reason (on the very odd occasion when i have to get a blood test, i have to sit facing a clock or else i’ll panic which isn’t fun). The way that I look at it is this: one of the scariest animals you can meet is a human being. Because vampires look almost exactly like humans, they can trick their prey into believing that they really are human. And then, it’s bite time. Could a werewolf do that? I don’t think so because you’d end up with a Michael Jackson “I’m not like other boys” kind of thing, which is your cue to run. You don’t get that with a vampire because they’re sneaky like that.

Let me be very personal with you, friends. I am terrified of growing old and dying. It truly horrifies me to the point that I have two massive existential crises every single year. One the week before my birthday, and one the week before New Year’s Eve. Some people in this world are completely cool with getting old and dying because that’s just the way life is. I am not one of those people. If someone gave me the chance to stay the exact same age I am now for the rest of time or until I got bored and decided it was time to go, I would 100% definitely take it. No questions asked. Dying sounds horrible and I don’t want to do it not that i have a choice in the matter, though…). Getting older is something that worries a lot of people, but it really freaks me out and it always has. I don’t think I will ever be ready to face the responsibilities of being an adult but at the same time getting old freaks me out because I don’t ever want to get to the stage where I am basically an overgrown baby who needs someone to take care of them. I don’t want to lose control of my mind or my body, which has happened to both a grandparent and a great-grandparent of mine. The fact that our bodies just slowly wither up and die scares me so much and that’s probably the biggest reason why I’m so drawn to vampires. The concept of staying young forever is alluring to me because I don’t want to get old and I don’t want to die. I’m also not squicked by blood, but that’s a different matter.

What’s your favourite supernatural creature to see in fiction? Why do you like them so much? Does fiction help you deal with things that frighten you?