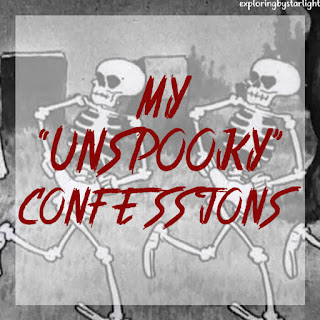 I love doing these kinds of “un-something confessions” or unpopular opinions kinds of posts because I love to be pretentious and show everyone how cool I am just because I have a different opinion to everyone else. Nah, I’m just kidding, but I do like to explain why I think certain ways about things while also treating something so mundane as some kind of cardinal sin. Okay, maybe it’s not that deep. Anyways, on YouTube there’s a tag that a lot of goth YouTubers do called the “10 UnGoth Confessions” tag, where they list ten things they do or like that aren’t conventionally “goth”. I’ve done of these kinds of posts for general “unbookish” confessions, but since it is the spooky season, I wanted to shake it up and do some “unspooky” confessions. Because tis the season and all that.

There are two reasons as to why I’ve never seen The Nightmare Before Christmas: the first is because it’s literally never on TV. Ever. And if it is, I end up missing it because I didn’t even know that it was on. The second reason is that I have no idea when to watch this movie. Is it a Halloween movie? Is it a Christmas movie? I don’t know. I’m so confused. I think another thing that puts me off of watching it is that this is one of those movies that is loved by so many people that there’s kind of a pressure on you to like it. What if I watch it and think it’s a pile of garbage? What if I don’t have any strong feelings one way or another?

Yep, you read that right. I’m still a newbie to the horror genre. When I first started this blog, I would not have touched anything in the horror genre with a ten-foot pole. No way, no how. If it was scary even in the slightest, I didn’t want anything to do with it. I was scared of the music video for Michael Jackson’s Thriller up until I was seventeen, so scary things just didn’t spark any interest in me. Heck, I was scared of the 20th Century Fox logo when I was a kid. Actually, I was scared of everything when I was a kid.

This is the part where I sound incredibly bougie because I didn’t like horror, or gothic, or anything scary until I studied it and looked at it more critically. I can just hear the groans. I don’t want to ruin anybody’s fun, I just like analysing things. And yes, you can find meaning in anything. Fight me. It’s called semiotics. To me, studying something can help me to appreciate it more, which is definitely the case with horror, and Gothic in particular. I like being able to point out tropes and meanings, which I don’t think is a bad thing. Horror isn’t just about senseless violence and scaring people, you see.

A few people may share this opinion with me, but I really, really hate gore. I don’t mind blood, but I do mind when it’s taken to a complete extreme just for shock value and without a plot. Gore for gore’s sake, that kind of thing. When I watch a horror movie I want to be frightened, not outright grossed out and nauseated. The main reason for me not liking gore is because I’m a little squeamish, but only when it comes to the human body. You probably won’t catch me watching something like The Green Inferno anytime soon. I can deal with some body horror because it usually has some kind of plot or even social commentary, rather than just being overly violent for the sake of it.

Okay, so I specifically write about vampires, which doesn’t necessarily mean that I write horror, but I’m still pretty inexperienced with the genre. Usually, the most famous horror writers and directors are those who have always had a love of the genre but horror (especially Gothic) is something that I only recently discovered that I like, so I’ve kind of thrown myself into the deep end feet first with deciding to write about it. I probably couldn’t do ghost stories or come up with my own kind of scary monster right now, but that’s what practice is all about.

I know it’s not a good thing to admit to, but I am a pretty cynical and sceptical person. I have serious doubts about things like ghosts and aliens or exorcisms, and I tend to think that some things are sheer coincidences. I’m not going to shade people who do believe in those kinds of things because that’s not fair, but it’s just not something that I think is possible. This is the reason why whenever I see a scary story be called a “true story”, my inner Lois Lane pops up and goes really? If I do want to see a “true story” horror, I’d rather it be about something that can actually be explained, like how Psycho was inspired by a real serial killer, rather than unexplained phenomena like haunted houses and possessed dolls.

Here’s something that bugs me about horror: sometimes you get women protagonists who are portrayed incredibly well, like Ripley in the Alien series (apart from in the first movie where she ends up wearing the tiniest set of underwear i have ever seen), and other times a movie or a book will just be about a man killing women. Or a monster killing women. Or women killing each other. You get what I mean. There’s been a pretty disturbing theme of violence against women for pretty much the entire time that the genre has existed, and while it is getting better, it’s still an issue. One thing that bugged me was when the Wonder Woman movie premiered this year, a horror blog proudly proclaimed that horror had strong female characters first. It didn’t. When Wonder Woman made her comics debut in 1941, female characters in horror were still shrieking victims or femme fatales. There are much stronger characters these days, but there’s still a lot of work to be done, I think.

Actually, the more I think about it, there are more issues in horror than just misogyny. Like how the black dude is usually the first one who dies, and how terribly mental illness is portrayed.

What are some of your spooky confessions? Are there aspects of a genre you love that you’re conflicted about?