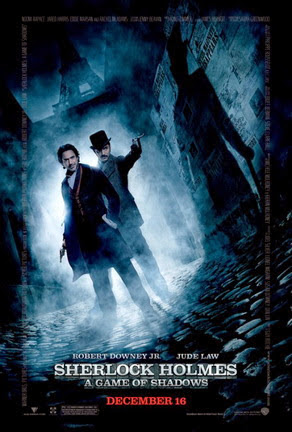 With Dr. John Watson about to marry and end their partnership, a disconsolate Sherlock Holmes occupies his time investigating the schemes of his archenemy, Professor James Moriarty. However, when Moriarty warns that he considers the Watsons a legitimate target for his retaliation against the detective, Holmes must save them and get John involved in one last case. To do so, they join the Roma lady Madame Simza Heron’s quest to find her missing brother, Rene, who may be the key to defeating Moriarty. Together, the trio find themselves involved in a dangerous international conspiracy led by the Napoleon of Crime in which the fate of all of Europe hangs in the balance.

I wasn’t too fond of the first Sherlock Holmes movie because I didn’t really understand what was going on, so when I saw this instalment’s trailer I wasn’t particuilarly interested in going to see it. However when I did go to the cinema I didn’t orginally want to see this (my friends andI wanted to see The Sitter but the youngest member of our group couldn’t get in) but I was pleasantly surprised.

The opening scene was, to me, quite confusing. I wasn’t sure of what was going on with Irene Adler who was only in the whole movie for about ten minutes. Even though her appearance was important, it could have been longer rather than doing a Psycho and killing off one of the movie’s most famous stars right at the beginning. However, it did grab my attention.

I liked the main elements of the plot; especially the Watsons’ marriage. The wedding scene was incredibly cute. It made me want a Victorian style wedding. I love how the film started and finished at the same place; with Watson sitting at a typewriter writing a memoir of some sort. I love it when films do that.

I really admire the character of Sherlock Holmes. He’s witty, daring and above everything, incredibly intelligent. I preferred Holmes in this movie; he was more of a detective here and didn’t hit on anyone. Probably because there was no Irene for him to hit on. I found Holmes’ fear of horses to be hilarious; I laughed all the way through the scene in which he rides a Shetland pony up a mountain.

I felt that Dr. Watson was a bit more direct in this movie; especially when he is attempting to resuscitate Holmes. He didn’t seem as daring or direct in the first movie (bear in mind that I didn’t pay close attention while watching it) so I also preferred him here. I don’t think anyone could have done a better job than Jude Law.

If I had to say a few magatives, the first would be about Stephen Fry’s nude scene. Some things are better left to the imagination, and that includes Stephen Fry’s bum. The second would be the moments where Holmes analyses his tactics. I can only take so much slow-motion footage and the fights looked so much cooler in regular spped. The last negative I have is the length of Rachel McAdams’ performance as Irene Adler. It was far too short for me. She may as well have not been in the movie at all.

Overall, I really enjoyed this movie; it was funny and action-packed at the same time. The plot was engaging but I still want to pull my eyes out at the sight of Stephen Fry’s naked body. It burns!