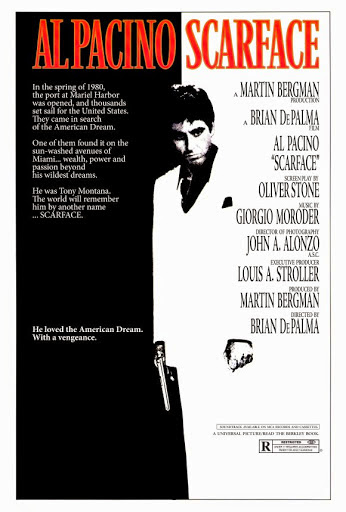 When Fidel Castro opens the harbour at Mariel, Cuba, he sends 125,000 Cuban refugees to reunite with their relatives in the United States. Among all the refugees, there is one who wants it all; his name is Tony Montana (Pacino). Tony and his friend Manny (Bauer) arrive in the United States and start in small time jobs. Soon, they are hired by Omar Suarez (Abraham) to pay money to a group of Colombians. When the deal goes wrong, Tony and Manny leave with the money and succeed in their job. Soon, Tony meets with drug kingpin Frank Lopez (Loggia) and falls for his boss’ girl, Elvira (Pfeiffer). Pretty soon Tony will know that those who want it all do not last forever; that is the price of power. The world will know Montana by one name… Scarface.

Everybody knows Scarface. We’ve all heard ‘say hello to my little friend’ at least once. I’ve been meaning to watch this film for a long time, but I’ve never been able to buy or rent a copy because I’m not eighteen yet (UK laws prohibit the sale of DVDs and video games to people under the age of the BBFC rating stated on the box). However, I got a box set of Pacino films for Christmas and the film was included; yay (the other films will be reviewed at a later date)!

The poster and DVD box art is probably the most iconic piece of film artwork ever. Even though it is a black and white image, it is incredibly striking and eye-catching. The gun in Pacino’s hand connotes violence, blood and death, while the stark grainy image suggests that the film is of a grain nature. From these small observations I can guess that the film will be incredibly violent.

I haven’t seen the original Scarface but from what I’ve looked up, the two films have nearly the same plot and is set in an earlier time period. However, I felt that this was very different from other gangster films I’ve seen as the characters are Cuban, rather than Italian, and focus on a drug cartel rather than a family. It was a nice change. Even though the plot centres around drugs, I thought that the drug use became incredibly excessive. I never want to hear the sound of cocaine being snorted ever again. Such a repulsive noise… I can’t really comment on the writing as I have not seen the original, but I think that Stone did a good job with the story and a lot of the lines are incredibly memorable. Here’s some examples of a couple:

“You wanna fuck with me? Okay. You wanna play rough? Okay. Say hello to my little friend!”

Tony Montana is a difficult character to say whether you like him or not. You kind of want him to succeed in his dreams and achieve them, but at the same time he is a repulsive character who deserves all the negatives that are thrown at him. I enjoyed Pacino’s portrayal of Montana. The accent was flawless and he didn’t turn Montana into a Cuban stereotype. His portrayal, in my opinion as I don’t know many Cubans, was very accurate of what happens to people who get into the drug cartel business; he keeps wanting more and more until their life and business is put in danger from rival businesses and the law.


At times, especially the beginning, Manny seemed like a bit of a creep. He constantly comments on the quality of women’s breasts and tries to score with them. Even during one of the first jobs, he’s trying to score with some tart with Tony is being forced to watch Angel being mutilated with a chainsaw. However, he did become more likeable and even more sensible than Tony. I thought that the chemistry he has with Gina is quite cute. I kept counting down to when they would get together. I thought that Manny’s fate was pretty shocking and unexpected. The effect of it was shattering.

Michelle Pfeiffer is one of my favourite actresses and I loved her performance as Elvira. She was incredibly different to typical gangster wives. She didn’t sit back and take her abuse like a good wife, she combated it and refused to take that. I felt that that was her best quality. She knew how to handle herself around creeps and was perfectly feisty. I thought that her dress sense wasn’t trashy as she had the confidence to pull it off and has the right body for it. I liked Elvira and wished she contributed to the plot just a little bit more.

Gina, I thought, was a bit of an odd character. She obviously cares about and loves her brother but she purposely goes and betrays him behind his back simply to prove that he is no longer a baby. I felt that she went about that in the wrong way, which is understandable as Tony simply doesn’t listen to anybody who is female. I felt that Mary Elizabeth Mastrantonio’s performance was incredibly strong and emotionally charged, however I thought that her Cuban accent was a bit on the weak side. Some words were pronounced with an American Accent and others with a heavy Cuban accent. The fluidity of it was a bit off to me.

This film is incredibly realistic. As I’d said, I got incredibly sick of the sound of snorting cocaine. A lot of the violence and drug use started to get excessive as the film progressed; Montana got to the point of pouring huge piles of coke onto his desk and shoving his face in it. There was only one point in the film when I had to cover my face, only to find that nothing was shown, and that was when Angel gets killed with a chainsaw. The violence is increasingly grisly and becomes over the top at some times. However, I imagine that this is realistic as humans do tend to bleed a lot when they are shot, stabbed or mutilated.

The instrumental score of the film, for me, is incredibly eighties. A lot of synthesisers are used, which aren’t as good as creating tense, romantic, or melancholy moments as acoustic string instruments. However, it does fit in with the era, especially the background music used in scenes that take place in clubs (which Montana danced like a dad at a wedding to). There wasn’t really a variety in pop music used as they all really sounded the same and didn’t vary at all.

I liked the setting of Miami. Not many gangster films are set in Florida (the ones I’ve seen aren’t), they’re usually in places like New York and Chicago; so, again, it was nice to see some variation in the genre. I, personally, didn’t see any signifiance of Miami but I think it is historically significant and something to do with Fidel Castro opening the harbour. Something like that. Some of the houses featured in the film look fantastic, especially Tony Montana’s house. I would love to have a house like that.


I was very impressed by this film and really enjoyed watching it. The performances were wonderful, the plot was engaging and you could feel some of the raw emotions of the characters. However, the music was incredibly eighties and the amount of strong language, hard drug use and violence became a bit excessive at the end. But, that aside, this was a fantastic film.