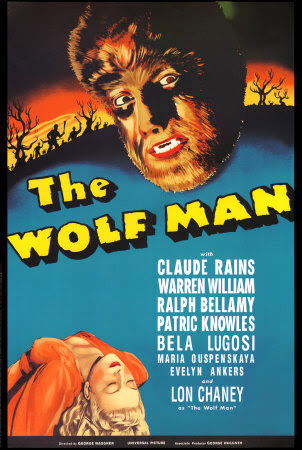 Upon the death of his brother, Larry Talbot returns from America to his ancestral home in Wales. He visits a gypsy camp with a village girl Jenny Williams, who is attacked by Béla, a gypsy who has turned into a werewolf. Larry kills the werewolf but is bitten during the fight. Béla’s mother tells him that this will cause him to become a werewolf at each full moon. Larry confesses his plight to his unbelieving father, Sir John, who then joins the villagers in a hunt for the wolf. Larry, transformed by the full moon, heads for the forest and a fateful meeting with both Sir John and Gwen.

Another Universal Monster! These are becoming the only horror films that I can watch since I’m still a wimp. Oh well. My dad’s given me a brief insight to each of the films that he has seen and told me about this one the most. Werewolves aren’t my favourite monsters and I haven’t seen/read much that features them.

Thankfully, The Wolf Man is not based on a book so there’s nothing for me to pick up on (yay!). I loved how the plot was centred around the original legend of werewolves and how becoming one has a horrific effect on Larry Talbot. I liked being able to see something where the werewolf is the central character, rather than being secondary to someone else, it made the film a bit more scary.

Throughout the film there is a poem that is repeated whenever werewolves are mentioned:

Even a man who is pure at heart
and says his prayers at night
may become a wolf when the wolfbane blooms
and the autumn moon is bright.

It sounds like the poem would get really irritating, but believe me, it doesn’t. I found it actually quite enjoyable to hear and I didn’t even have to Google it to type it above since it has pretty much stuck in my head.

Although I really loved Lon Chaney’s performance, I felt that his character wasn’t written correctly. Making Talbot the son of an English lord seemed a bit inappropriate, especially since he was American. I haven’t yet plucked up the courage to watch the 2012 version of the film but I think I will be just a little bit biased against  it since Chaney’s performance was just so spot on. The way he moves as the werewolf is just so monsterlike, it’s fascinating to watch.

There is only one problem that I have with The Wolf Man. The film is set in a fictional village in Wales but not a single person speaks with a welsh accent. Not even a slight one. With the exceptions of Béla and Maleva, everyone either speaks in an American accent or what I like to call a BBC accent (which was how every British actor spoke back then). The film doesn’t make it clear that the setting is Wales but I did like how the film wasn’t set in England. Weird, but that was something that I liked.

The special effects of The Wolf Man may look primative compared to its 2010 remake, but it’s still pretty cool to watch the scene in which Talbot transforms into a werewolf. He’s just sitting in a chair but seeing him get progressively hairier and hairier as he transforms has an old-school coolness about it.