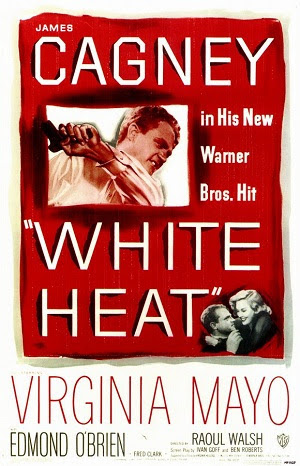 After killing two men in a train robbery, Cody Jarrett pleads guilty to a far less series crime that occurred at the same time, but in a distant location, thereby giving him a perfect alibi. The Treasury Department decides to plant one of their officers, Hank Fallon, in the prison to see if they can learn where Jarrett hid the Treasury Bonds he stole. Jarrett and Fallon become good friends and when Jarrett makes a break for it, Fallon goes with him. Jarrett’s next robbery involved stealing the nearly half-million dollar payroll from a chemical factory, but using modern technology, the Feds are the able to track him down and bring his robbery and killing spree to an end.

I have a huge love of gangster films and I found it quite shocking that I hadn’t seen a single James Cagney film until now. Dude was pretty much the quintessential tough guy back in the day and is still considered to be Hollywood’s Greatest Tough Guy.

For me, the plot of White Heat had its ups and downs. The concept and the story itself is really good, but it felt a bit too drawn out in places for me. Now, I wasn’t expecting the film to be all action all the way through but I would have liked just a little bit more. Most of the action appeared toward the end of the film where the tensions are at their highest. I hate to say it but there were some points where I had to force myself

James Cagney’s performance as Cody Jarrett blew me away. Seriously, I’d never seen any performance such as that. I thought that the character of Cody Jarrett was fascinating, as quite a lot of psychotic characters are. But what made Jarrett different is that we’re not supposed to feel sorry for him or relate with him in any way, shape or form. He’s a character that the audience is supposed to absolutely loathe. His mother complex makes him look almost infantile in a way and while I’m quite sure that a lot of us love our mothers, his obsession with his mother is just dangerous. The way that Cagney portrayed Jarrett’s psychotic nature was done absolutely perfectly.

Although I didn’t pay much attention to the music of White Heat, what I did pay attention to was fantastic. I loved how it was typically noir, dramatic and completely fitted to the scenes that music was featured in. I also loved how the context of the scene matched the music that was heard; there’s nothing that irritates me more in a film than when music is used inappropriately. Thankfully, it was used properly here.

I really hate to say it because this film is so good but the only thing that stopped White Heat from getting 5 Ray Guns was the way in which the story was dragged out. As they sort of say where I’m from: less talk, mare action (no, that isn’t a typo)! But other than that, the rest of the film was awesome. I’ll definitely be watching more of Cagney’s films in the future!