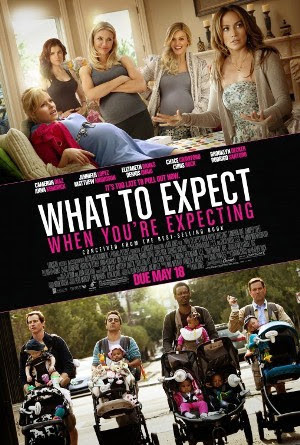 Over the moon about starting a family, TV fitness guru Jules and dance show star Evan find that their high-octane celebrity lives don’t stand a chance against the surprise demands of pregnancy. Baby-crazy author and advocate Wendy gets a taste of her own militant mommy advice when pregnancy hormones ravage her body; while Wendy’s husband, Gary, struggles not to be outdone by his competitive alpha-Dad, who’s expecting twins with his much younger trophy wife, Skyler. Photographer Holly is prepared to travel the globe to adopt a child, but her husband Alex isn’t so sure, and tries to quiet his panic by attending a “dudes” support group, where new fathers get to tell it like it really is. And rival food truck chefs Rosie and Marco’s surprise hook-up results in an unexpected quandary: what to do when your first child comes before your first date?

The story of me going to see this film is quite a funny story. I went to go see What to Expect on a total whim, by myself. I’d never been to the cinema alone before seeing this and I didn’t really know what I wanted to see (I was planning on seeing Red Lights, but maybe another time).

This is one of those films where everyone is connected in some way, shape or form. I thought it would get confusing, but it doesn’t because all of the connections are revealed as the film progresses. Now, I’m going to come right out and say it: I am child un-friendly. I really do not like children, specifically babies. Has this film changed my view on babies? I’d say no, but I am now more sympathetic of what pregnant women go through (I have a habit of ripping the pregnant women on One Born Every Minute to shreds) after watching this film. I think what I liked the most is that the film showed both sides of pregnancy and having children, rather than just one. There were plenty of touching moments in the film, two of the most being Jennifer Lopez’ character, Holly, travelling to Ethiopia with her husband to adopt their child and (spoiler alert!) Anna Kendrick’s character, Rosie, suffering a miscarriage. I don’t like babies, but one dying (regardless of whether it’s been born yet) never makes me feel anything warm and fuzzy.

There are a ton of characters to talk about, but I’ll only mention the ones that stuck out the most for me. The first one being Skyler, played by Brooklyn Decker. How she managed to stay stick thin while pregnant with twins, I will never know. It was unreal how much of a breeze her pregnancy looks, even giving birth was easy (all she had to do was sneeze)! I thought it was actually pretty funny how her pregnancy was so easy to the point that she looked like she enjoyed it.

I had my doubts about Jennifer Lopez’s acting skills because from what I’ve seen on IMDb, she’s been in quite a few bombs. However, she was really, really good here. Surprisingly, she has quite good comedic timing. I loved her character, Holly; I loved how she was willing to do what’s best for her upcoming family and her husband, however bad it is. I love characters like that.

I loved the use of music in What to Expect; everything was allocated to the right scenes. Also in Rosie’s miscarriage scene, that I mentioned above, there is no speech at all, just music. I love it when filmmakers do that. It just emphasises how horrible a moment can be for someone, and I think that that particular scene was the perfect example.

I wasn’t expecting (no pun intended) to like this film as much as I did. It was funny, it was heartwarming, and I really, really liked it. It’s not necessarily a film that I would go see at the cinema again, but one that I liked enough to wait for the DVD release.