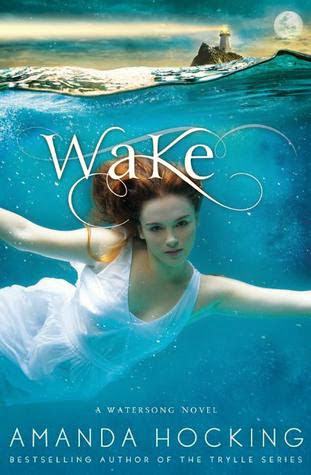 Beautiful. Fearless. Dangerous.
The kind of girls you envy. The kind of girls you want to hate.
Strangers in town for the summer, Penn, Thea and Lexi have caught everyone’s attention, including the eye of practical Harper. but it’s her sister, Gemma, they’ve chosen. Sixteen-year-old Gemma seems to have it all – carefree, pretty and falling in love with the boy next door. But her greatest passion is the water. She craves solitary late-night swims under the stars, where she can belong to the sea. But lately she’s had company.
Penn, Thea and Lexi spend their nights dancing and partying on the cove, and one night Gemma joins them. She wakes, groggy, on the beach the next morning and knows something has changed. And as she discovers her new mythical powers, Gemma is forced to choose between staying with those she loves – or entering a dark world brimming with unimaginable secrets.

I don’t think I’ve ever read a book like Wake before. What primarily attracted me to pick up a copy was the fact that the book is blue (blue is my favourite colour) but the synopsis did intrigue me too. I’ve never been too interested in mythology or mermaids/sirens, but I figured that I would give them a try. I didn’t have the highest of expectations but I wasn’t expecting the book to be so… forgettable.

The main reason why I found Wake to be forgettable is its plot. The main body of the plot is rushed into and once it has happened, the story moves quite slowly until the final quarter when something exciting actually happens. I did manage to breeze through Wake, but the speed that I got through it didn’t make the story any better.

I found the characters of Wake to not be very memorable. None of them really left a lasting impact on me and pretty much fell flat. I think my main issue is with Gemma; she changed a little bit too quickly for my liking. I would have preferred it if she had gradually changed throughout the book, rather than all at once. Harper, on the other hand, got on my nerves a bit. She seemed like she was a bit too big for her boots and needed to relax a little bit when playing mother to Gemma.

At odd as it may sound, the setting of Wake was the best part of the book for me. I live in a seaside town, similar to the one that Wake is set in. That’s probably where the familiarities I have with this book ends. I particularly enjoyed reading parts in the book that take place in the water, because I find the water to be quite fascinating.

The creatures that appear in Wake are mythological sirens and their story is told in what I think is full detail within the book. Honestly, the myth just confused me. I just couldn’t wrap my head around it other than, if you don’t go with them you’re going to die. That was pretty much all that I understood. I think once this series is over, I’ll be sticking to The Little Mermaid type mermaids, thank you very much.

Every once in a while I read a book that is neither amazing nor terrible. For me, Wake is one of those books. While the premise certainly sounds interesting, the majority of the elements of the story are just average. However, I will be continuing into the series as I am interested to see what happens next in the series.