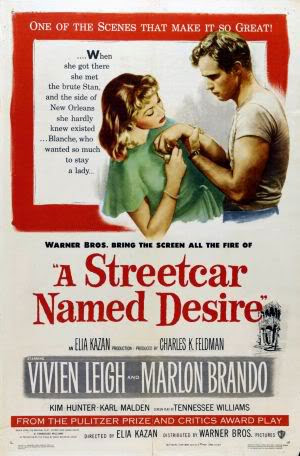 Blanche is in real need of a protector at this stage in her life when circumstances lead her into paying a visit to her younger sister Stella in New Orleans. She doesn’t understand how Stella, who is expecting her first child, could have picked a husband so lacking in refinement. Stanley Kowalski’s buddies come over to the house to play cars and one of them, Mitch, finds Blanche attractive until Stanley tells him about what kind of woman Blanche really is. What will happen when Stella goes to the hospital to have her baby and just Blanche and her brother-in-law are in the house?

I put off watching this movie for a really long time. Too long really. I saw it in HMV about two years ago and haven’t seen it in any shop until last Wednesday (23/05/2012). I’m not sure why I put off watching this; Marlon Brando is my favourite actor EVER and this is one of his most famous roles.

What I love about the plot of this movie is that it appears simple, but it’s a lot more complex than you think. Blanche has gone to New Orleans to visit her sister Stella and her brother-in-law Stanley due to certain circumstances that are initially quite unclear. These circumstances are slowly revealed as the film progresses and Blanche begins to break down. I loved how this breakdown was presented in the plot as an ongoing thing, since her visit lasts five months. I’ve really got to hand it to Tennessee Williams, even though his play had to be changed a bit to be made into a movie, the story that he is written is fantastic!

All of the performances in this movie are amazing. Every actor was in the original production (Vivien Leigh was in the London production, while the others were on Broadway), which I think was a good choice by Kazan, as they know their characters best.

What I loved the most about Vivien Leigh’s Blanche is that she was incredibly believable, and I’m not saying that because she suffered from bipolar disorder. She seemed to have this terrified look on her face all the time and you could tell that the women was going through a breakdown, just from her face. However, I thought that her southern drawl wasn’t particularly good. You could tell that Leigh was English when she said some words; her accent was a weird mishmash of English and a southern drawl (I’m not sure of which state).

Why Brando didn’t win Best Actor in a Leading Role for this movie, I’ll never know why. He really deserved it! I’m probably just saying that because he has his shirt off a few times and looks FINE. His portrayal of Stanley is pretty much the definitive Stanley, I don’t think anyone else could top that. I felt so sorry for Stanley when Stella runs out of the house and he shouts for her to come back. I just wanted to give him the biggest hug ever (and also what happens afterwards, but I’ll leave that for now). That’s what I like about Stanley, he’s an absolute monster to his wife and to his sister-in-law but you can’t help but love him at the same time as being repulsed by him. I think Stanley is probably my favourite character in the movie. I just loved him.

I loved how the setting doesn’t really progress much further than the Kowalski’s apartment, which, if you look incredibly closely, gets smaller as the movie progresses to reflect Blanche’s growing paranoia. Good technique, Mr.Kazan. I really liked the New Orleans setting, although I’m not too familiar with the city itself.

This movie. Oh. My. God. This movie is a masterpiece. I loved every minute of it, everything was just to good. This is definitely an instant favourite for me. I’d highly recommend watching this movie sometime in your life.