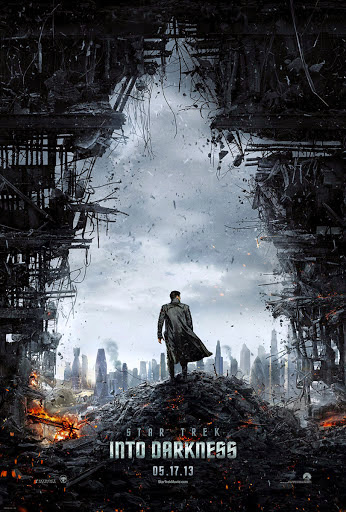 When the crew of the Enterprise is called back home, they find an unstoppable force of terror from within their own organisation has detonated the fleet and everything it stands for, leaving our world in a state of crisis. With a personal score to settle, Captain Kirk leads a manhunt to a war-zone world to capture a one man weapon of mass destruction. As our heroes are propelled into an epic chess game of life and death, love will be challenged, friendships will be torn apart, and sacrifices must be made for the only family Kirk has left: his crew.

After an excruciatingly long eternity (okay, maybe not that long), it’s finally here! And after following every teaser, interview, trailer release and what is probably the worst kept secret in Hollywood, this little Trekkie finally sat down in the cinema for one of the most anticipated films of the year. I don’t really need to explain how much of a Star Trek fan I am, but I was so excited for this film to come out that I nearly exploded. I sat in the cinema hoping for the ride of my life, and did I get it? Damn right I did.

Into Darkness begins on a class M planet where Kirk and Bones are being chased by the planet’s primitive inhabitants, straight-away breaking the one thing that is broken in pretty much every single episode of  every Star Trek series: the Prime Directive (Starfleet are not allowed to interfere with other cultures and civilisations). Meanwhile, the Enterprise hides on the ocean floor and Spock goes into a live erupting volcano to set off a detonation device which will render it dormant. Back on Earth, in London a top Starfleet agent named John Harrison is creating chaos by forcing other members to blow up Federation buildings.  Admiral Marcus then gives Kirk and the rest of the Enterprise crew the mission of taking Harrison prisoner and bringing him back to Starfleet. And that’s about as far as I’m going to go in terms of summarising because I’d end up giving away the film’s big reveal. Speaking of the big reveal, for months and months I was hoping that it was just a rumour but now that I’ve seen the film, I really liked the way that it was done. There wasn’t a single moment in this film where I was bored or stopped paying attention. Something was always happening and there was so much tension that I could have pulled my hair out and ended up with a bald spot. While Star Trek was an origin story that payed homage to The Original Series, Into Darkness is its own story but it does draw some very obvious influences with some very clever role reversal. I think the film’s story was incredibly well-written and there are very few flaws that I could find within the story. Although I did say that parts of the story can be clever, I felt that it got just a little bit predictable towards the end, especially if you have seen the ‘obvious influence’ that I mentioned above.

The cast of Into Darkness are what I think makes the film so great. If the cast hadn’t given such strong and powerful performances, the film would’ve fell flat. Abrams definitely made the best casting decisions here. Everyone who was in the first film had definitely improved since then because they obviously know where exactly they’re going with their characters, but the best performance of the film is definitely Benedict Cumberbatch’s performance as the film’s villain. Up until this point, I’d only ever seen him play good characters and seeing him being all villainy was actually really chilling. Probably because humans can be scarier than aliens because there are some alien species in science fiction that are completely bestial and are unaware, unlike humans. As odd as it may sound, I actually liked seeing him being completely malevolent and brutally violent because to me it showed how awesome of an actor he is. He can do good and he can really do bad.

Now, my favourite Star Trek character is Spock, but that’s in The Original Series. My favourite character in this alternate universe series is Chekov (or as I call him, Baby Chekov), played by Anton Yelchin, and I am so glad that he got so much more screen time. But, despite that, I still do like Zachary Quinto’s Spock because he plays him as being more conflicted at times than Leonard Nimoy’s Spock who is much more controlled. I’m still not a fan of the whole Spock-Uhura relationship though. It still doesn’t sit right with me and I don’t think it ever will.

Into Darkness takes place in a number of locations. We go to San Francisco, London, the planet at the beginning of the film (which I can’t remember for the life of me), on-board the Enterprise and even outside of Federation space onto the Klingon homeworld of Q’onoS (the film uses the phonetic spelling of Kronos, while I prefer the former spelling). We don’t get to see much of the planet but what we do is very much what the Klingons themselves are like: rough and wild. It’s incredibly obvious now that I really like my setting and besides, not all of the action in Star Trek happens on just the ship, they do leave it quite a few times!

The CGI and special effects of Into Darkness are just spectacular. I honestly haven’t seen effects this good in quite a while now (probably because I’ve been watching a lot of dramas lately) and these amazing effects gave me a very good welcome back to my beloved sci-fi. I personally loved being able to see the Enterprise go into warp speed and all the residue that the ship would leave behind after shooting off and also how all of the lens flares that were in pretty much every single scene of Star Trek were limited to the scenes that took place on starships, which I was so relieved about. Seriously, they get incredibly distracting after about five minutes. I loved the use of colour on-screen and how it progresses. Everything starts out all bright and colourful, and as the film progresses the colours become more subdued to fit with the increasing dark tone.

Holy crap, the music of this film is just so good. It’s there at the right times to just more tension or emotion to scenes and it is just so majestic. While the score is an original for pretty much the whole film, I loved how this series manages to incorporate the original Star Trek theme song into the credits. I mean, let’s face it, Star Trek is easily recognised by its signature theme tune and even the TNG films had their theme in them.