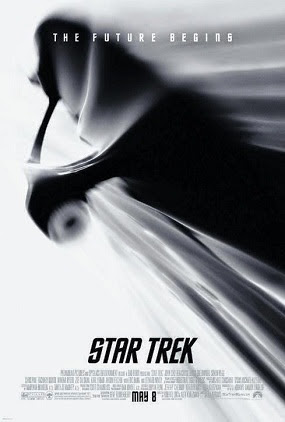 On the day of James Kirk’s birth, his father dies on his ship in a last stand against a mysterious time-traveling vessel looking for Ambassador Spock, who, in this time, is also a child on Vulcan disdained by his neighbours for his half-human heritage. Twenty-five years later, Kirk has grown into a young troublemaker. Challenged by Captain Christopher Pike to realise his potential in Starfleet, he comes to annoy instructors like young Commander Spock. Suddenly, there is an emergency at Vulcan and the newly commissioned USS Enterprise is crewed with promising caderts like Nyota Uhura, Hikaru Sulu, Pavel Chekov and even Kirk himself, thanks to Leonard McCoy’s medical trickery. Together, this crew will have an adventure in the final frontier where the old legend is altered forever as a new version of it begins.

I was incredibly skeptical when this movie was released in theatres, so my Dad and I (we both like Star Trek) didn’t go see it. However, the sequel is going to be released next year so I went out, bought the DVD (at the very low price of £2.50) and watched it as soon as I got home.

One thing that I really liked about this story is that it’s an origin story, but an alternate universe at the same time. That’s really interesting to me, and before I even knew what the movie was about, I was thinking ‘if there is already a Spock, what’s Leonard Nimoy doing here?’ Obviously, I now know, because his Spock and new villain Nero have confrontations with the younger characters of this universe. Hurray for alternate universes!

I loved how the characters were portrayed here, it was incredibly accurate. I loved Zoe Saldana’s Uhura the most; she made her feistier than Nichelle Nichols’ Uhura. That’s kind of what Uhura needed, to be spiced up and made feistier. However, I thought that her “romance” with Spock was really weird. It felt a little bit out of place, but hey, it’s an alternate universe.

The sets for this movie were incredible. Even though there is quite a lot of green screen going on, the locations were beautiful too. I loved the set design of the Enterprise’s bridge, it kind of stayed true to the bridge from TOS, but it looked more modern at the same time. No overuse of red, I think. I also loved how the real locations were made to look more futuristic, for example, the tall skyscrapers in the distance for the scenes that take place in Iowa.
The special effects of this movie feel a bit Star Wars to me and a lot of people would consider that sacrilege. However, I think that it really worked, the effects are amazing. However, there are two things that are really overused. The first one is lens flares. In pretty much every single scene there is one or two lens flares. It got old after a while and I was sick of the sight of them. Also, there is no light in space, so why would there be reflected light? The second thing is my ultimate pet peeve of camera techniques: shaky-cam. Oh, shaky-cam how I despise thee, how I wish thee would cease to exist, how thee make me feel dizzy. Okay, I’ll stop now, but you get my point. Shaky-cam annoys the life out of me because it makes me feel sick. Yes, I know that I’m supposed to feel like I’m there in the action, but it must stop!
Overall, I enjoyed this movie. The plot and cast were amazing, as were the effects. However, this movie does have a Star Wars feel to it and certain parts of the editing and camera techniques were too much for me. I would recommend this for anyone who isn’t familiar with Star Trek and isn’t ready to jump straight into the series yet. Bring on Star Trek 2!