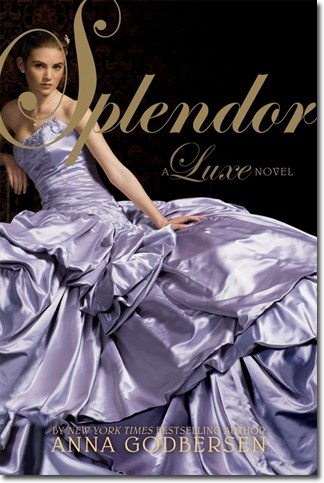 New York City, 1900
While the once revered Holland family recovers from scandal, the spirited Miss Diana Holland is seeking adventure abroad. But then a surprising clue about her father’s death is revealed and everything is thrown into question.
Meanwhile, the delectable Henry Schoonmaker has also left the city and bravely gone to war while his wife relishes her role as Manhattan royalty – until a real prince pays a visit and turns her fickle head.
As New York’s most dazzling stars chase dreams, cling to promises and tempt fate, society wonders: at exactly what prince does a life of splendour come?

I’ve finally finished The Luxe series! Finally! I hadn’t found the series to be too impressive since the story tends to run quite slowly (that can be partly owed to the fact that very little things that stand out happened in the time period that the series is set in), but I really do like Anna Godbersen and I was willing to give the final book in the series a chance, hoping that the ending would be satisfying. That didn’t happen. For me, Splendour was so meh, that I just didn’t react to any of it. Not even the bigger events.

My main problem with Splendour is that so little happened throughout the story that once things that would have been remotely exciting started to happen, my brain was just numb and refused to register a response. Towards the end, this happened just a little bit too much. I didn’t feel a single thing at all and that kind of worries me. Do I have a soul for not reacting to the compromising situations that these dull flat characters find themselves in? Probably but I’ll gain it back when I read something that actually makes me feel things.

One of the most disappointing things I thought occurred in Splendour is that the character development that appeared in Rumours and Envy is just completely thrown out of the window, except in one case. Penelope is still the horrible person that I would love to slaughter and leave for everyone to find, while Elizabeth has gone back to being dull and controlled which bored me so much. When she finally did show a backbone, I didn’t think much of it thanks to my numb brain. Another change in character that I didn’t react much to was the fact that towards the end of the book, Henry finally, finally, asserted himself and pretty much told people where to go. But, again, my brain was so numb by this point that I thought “good for him, should have done that sooner though“.

I have said in past reviews that I really like Anna Godbersen’s writing style but I completely take that back. After four books of flowery fluff and describing people’s frocks that actually sound quite hideous at times, I feel like my puke would be floral patterned. I honestly prefer the way that the books in the Bright Young Things series were written. It’s still a bit flowery, but nowhere near as flowery as here.

In all complete honestly, as odd as this sounds, I would have rather that this book was absolutely freaking terrible because then I would’ve actually had a reaction and this review would have been a whole lot easier to write. The fact that I just didn’t react is more frustrating that if I had wanted to throw the book into a woodchipper. Meh.