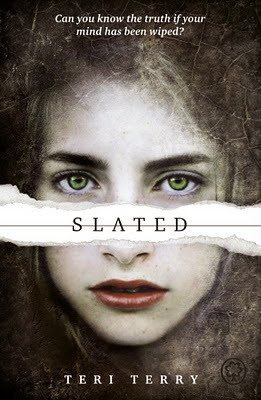 Kyla’s memory has been erased,
her personality wiped blank,
her memories lost for ever.
She’s been slated.
The government claims she was a terrorist, and that they are giving her a second chance – as long as she plays by their rules. But echoes of the past whisper in Kyla’s mind. Someone is lying to her, and nothing is as it seems. Who can she trust in her search for the truth?

I first saw Slated a while back in Asda and I thought that it sounded awesome but I didn’t have any money on me to buy it (shame on me!). So, I got some money, bought it and let it sit on my shelf for a while (double shame on me). When I did eventually pick it up, I didn’t know how impressed I would be.

The plot of Slated is one of the things that I loved the most about it. I love how original it is! Before reading this, I’d never read anything about blank memories so this was very fresh for me. I got completely absorbed into the story and I constantly wanted to read more and more. The only thing that bugged me about the plot is that there are a few loose ends that need to be tied about Kyla and even the Slating process itself. Also, the book’s ending chapter seemed a little bit disjointed to me. It left me wondering what had just happened.

I loved the characters of Slated, particularly Kyla, who made for a terrific narrator. It was fun to learn more about herself alongside her, since she is newly discovering who she is. I enjoyed her character because she felt quite unique compared to most characters because she is learning everything for what she thinks is the first time and it was interesting to see her grow as the book progressed.

Despite the great world-building of Slated, I wished that we were able to see more of it. The amount of settings are quite limited to Kyla’s house, school, hospital and the canal path that she goes running on. I do hope that the dystopia that has been created is explored more as the series progresses.

As I’d mentioned above, I really enjoyed the narrative of Slated. Kyla asks herself a lot of rhetorical questions that made me wonder along with her. Also, I enjoyed reading the dream sequences, which were written incredibly well and were filled to the brim with suspense.

Overall, I really enjoyed Slated! The characters were enjoyable and it had me hooked. However, there are a few loose ends that need to be tied, which hopefully will be in the next book.