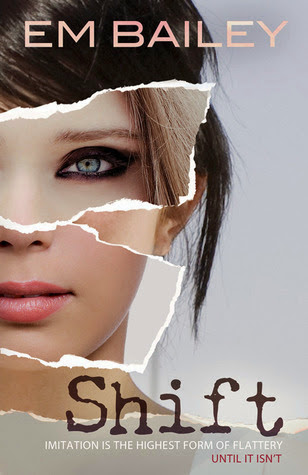 There were two things everyone knew about Miranda Vaile before she’d even started at our school. The first was that she had no parents – they were dead. And the second was that they were dead because Miranda had killed them.
Olive used to be the school queen-bee. But that was before her breakdown. Now she’s the class loner, and can only watch as new girl Miranda latches on to Olive’s ex-best friend Katie. Soon Miranda is talking like Katie, dressing like Katie – even going out with Katie’s boyfriend.
And then Katie dies. Everyone seems to believe it was a tragic accident, but Olive isn’t so sure. What if the wild rumours are true? What if Miranda really is a killer?

I’ve seen Shift in the bookshops for quite some time but I never really looked at the back of the book until fairly recently. The cover just really stands out on a shelf to me even though it doesn’t use as much colour as most other eye-catching book covers. There’s just something about distorted human faces that interest me. I love mysteries and as soon as I read the somewhat mysterious synopsis on the back of the book, I knew that I just had to read Shift. I haven’t read very many YA mysteries but after reading this book, I was very impressed!

Shift tells the story of former queen-bee Olive who has become the class loner after suffering a severe mental breakdown and attempting suicide after her dad left the family. At school, a mysterious new girl called Miranda starts at Olive’s school and very quickly latches onto Olive’s former best friend Katie and becomes nearly her clone, while Katie slowly withers away. My only problem with Shift‘s story is that it takes a little while to get into swing, but it doesn’t take too long to get to the mystery and thrills, which are present all the way through the book. I was really surprised by all of the reveals and even shocked at what happens to some characters. I enjoyed every twist and turn and the novel’s climax had my heart racing a mile a second.

The characters of Shift come in a close second as to why I liked the book so much. They really did make the story just that little bit better. I loved Olive as a MC, she is unique from most main characters I’ve read in quite a few ways. I’d never read from the point of view of a character who was suffering from a mental illness or one that was taking medication for it. Even her best friend Ami was possibly as unique as I’ve ever read in a book, but you’ll have to read the book to find out why she’s so different. Going back to Olive, I loved how real she was, tons of people experience the same things that she does and I found it really informative being able to know what she felt and almost understanding what it would be like. As for Miranda, she was the perfect realistic villain. She is manipulative and lies to get whatever she wants to the point that at times I was unsure of whether or not she was telling the truth. If I ever saw her in real life, I would probably run for the hills because sometimes the more composed villain is the more terrifying one.

Throughout Shift, there is a strong theme of mental illness which was very new to me and also important because there are many people who don’t understand mental illnesses and it doesn’t seem real to some people. I think that from reading this book, I understand more why some people have mental disorders and how they are dealt with, which is important to me since both of my parents suffer from depression. I love it when I gain something from reading fiction!

Although it took a little while to get there, I loved Shift. It was mysterious, thrilling and incredibly genuine. I enjoyed the story, the characters and I came out of the book understanding more, which is a definite plus. Shift is one of the most thrilling reads of my year!