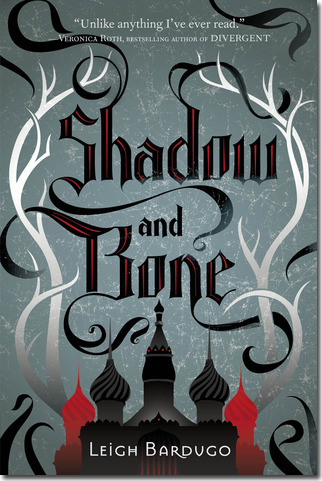 ‘I’ve been waiting for you a long time, Alina,’ he said. ‘You and I are going to change the world.’
The Shadow Fold, a swathe of impenetrable darkness, is slowly destroying the once-great nation of Ravka.
Alina, a pale, lonely orphan, discovers a unique power that thrusts her into the world of the kingdom’s magical elite – the Grisha. Could she be the key to setting Ravka free?
The Darkling, a man of seductive charm and terrifying power. If Alina is to fulfill her destiny, she must unlock her gift and fact up to her dangerous attraction to him.
But what of Mal, Alina’s childhood best friend? As Alina contemplates her dazzling new future, why can’t she ever quite forget him?

For years and years I wasn’t a fantasy fan. Dragons and magic and things like that have just never been my thing and nothing could ever convince me otherwise. I’d actually had Shadow and Bone on my TBR list before I realised that is fantasy, and ended up shelving it to wait for me until I was ready to try to get into fantasy properly. And I think it’s a good thing that I waited until I was ready to get into fantasy, because this book was like nothing I’d read before and well worth that long wait.
Shadow and Bone is the story of Alina, an army mapmaker in the country Ravka, that is being ravaged by a large mass of darkness known as the Shadow Fold. When her infantry is attacked by creatures in the Fold known as volcra, Alina discovers that she has a special power and is then drafted into Ravka’s magical elite, known as the Grisha.I really enjoyed the story of this book. My main fears with fantasy books is that I’ll just be thrown into an entirely fabricated world that I have absolutely no knowledge of, and that I’ll end up getting lost, but that really wasn’t the case at all with Shadow and Bone. All the way through, I knew exactly what was going on and thankfully for me, this didn’t feel like super hardcore fantasy like Lord of the Rings or Game of Thrones. I felt like the pace was quite steady for the most part, which I really didn’t mind at all because I liked being able to see Alina going through her training and struggling with it, rather than just taking to it like a fish to water. However, there were a few times where I found myself flicking towards the end of a chapter to see how much I had left to read because sometimes the story ran just a little too slow for me, but thankfully the pace was picked up again. Even though Shadow and Bone‘s story was pretty easy-going to for me for the most part, I did find myself reacting in a total “NO WAY WHAT??” kind of manner, especially towards the end, which left me having conflicting feelings about one specific character (if you’ve already read this, you’ll know who I mean).
Shadow and Bone has quite a lot of memorable characters, and I liked pretty much every character that was introduced. I loved Alina as a protagonist. One of my biggest fears with her character was that she would be a cliched “chosen one” kind of character, since the Darkling states that she is the Sun Summoner that he has been searching for. Thankfully, that totally wasn’t the case at all and she struggled through her training and coming to terms with living in a place as luxurious as the Little Palace, rather than taking to everything like she had been doing it since she was born. Even though this isn’t a realistic book at all, her struggles and realisations about her own power made her feel more lifelike to me and I just loved her all the way through. That character that I have conflicting feelings about? That would be the Darkling. Don’t get me wrong, I really do like him. But the Darkling feels like one of those characters that I should have conflicting feelings about, so I guess that’s a good thing. Hopefully I’m not revealing a spoiler here, but I liked him for the most part, but then a thing happens and I was all “OMG NOOO”, but then continued to still like him even though I technically shouldn’t. Ugh, I just love me some characters that make me feel all kinds of things.
For me, the best part of Shadow and Bone was the world that the book is set in. Every time that there was a description of the locations, I could get a good image of how Ravka is supposed to look, and it sounds pretty stunning. Especially both the Grand Palace and the Little Palace. If I could live in either of them, I could die a very happy bunny. The way that the setting are described are written beautifully and I could totally immerse myself in the words and transport myself to Ravka. However, my only problem with the world-building is that I don’t feel like I know enough about this world. This might just be me and my weird way of wanting to know every single little detail of a fictional world, but there are parts of the world-building that still feel like a bit of a mystery to me. I do hope that the history of Ravka and even maybe some character’s back stories will be explored in more depth in the next two books, because right now I just want to know everything.
Although I took Shadow and Bone quite slow so that I wouldn’t intimidate myself with it, I feel like I completely devoured it. My first real journey into fantasy has been a total success and Shadow and Bone is probably one of my favourite books of the year. I already want to continue on with the series, but TBRs are a thing that I do. Hopefully I can start Siege and Storm very soon!