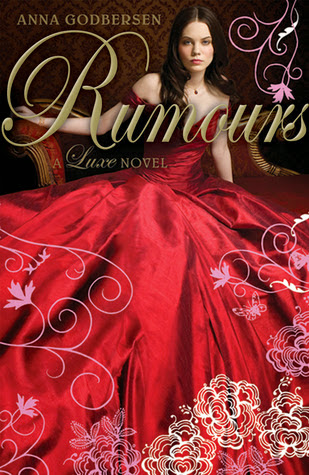 December 1899, New York City
Manhattan has bid farewell to its brightest star, the dazzling Miss Elizabeth Holland. Yet the rumours about her untimely demise continue. Meanwhile her sister, the irrepressible Diana, has been seen in the company of not one, but three eligible bachelors. Might there be a fourth?
In high society, reputation is everything. The Holland family simply can’t afford to be the subject of such wicked whispers. Heaven forbid that they should fall so spectacularly from grace…
There is a very fine line between the truth and lies, love and hate. And all is about to be gloriously revealed.

I wasn’t too impressed by The Luxe, but I don’t give up on a series unless it was excruciatingly horrific, which The Luxe wasn’t. I was really hoping that Rumours would be better than The Luxe, and it sort of was. Just a little bit…

I liked the plot of Rumours a lot more than that of The Luxe, as there are more events and drama that take place. It was fun to be able to see all angles of the plot from different perspectives and also the different things that happen in the characters lives. I was glad that there were more surprises and shocks as the book progressed, rather than leaving all of the surprises until the very end.

I said in my review of The Luxe, that I would have liked to have seen more of New York, and in Rumours that sort of happens. Although the high-class side is shown more often, the city is more explored and the setting even switches to California, where Will and Elizabeth are living. I liked being able to see how they live and what they do in California.

The theme of rumours being circulated is present throughout the book and, surprisingly, it didn’t get boring because I found it quite fun to see how one rumour could be twisted and turned on its head by many people. However, those two goddamned love triangles are still present and I honestly got bored of reading about it. And, to make matters worse, another one was added in!

Overall, Rumours is a slight improvement on The Luxe, but it isn’t all that better than it. The love triangles let the book down, but the characterisation and development of the plot were the best points.