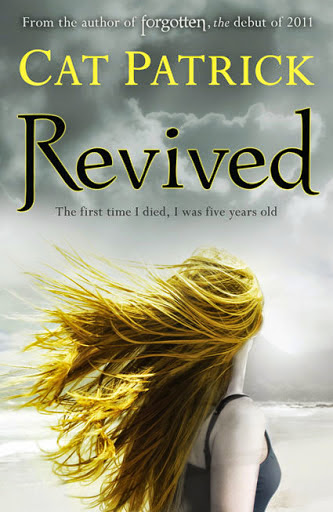 The world fades to nothing, and before I have the chance to think another thought… I’m dead.

My name is Daisy West and my whole life is a lie.

But this time I won’t let myself die. This time, I’ve found a love that I can’t let go. This time, I’m going to make my life my own.

I absolutely loved Cat Patrick’s debut novel, Forgotten so as soon as I saw Revived my instant reaction was “GIMME NOW!” Seriously, I wouldn’t have settled on waiting for the library to get it in, I had to own a copy for myself. I love how the cover sort of matches that of Forgotten, since you can’t see the girl’s face but her hair is in full colour. I just think that’s really cool. I think my standards were set a little bit too high but I definitely wasn’t disappointed by Revived.

The plot of Revived is what makes it so interesting. Daisy West has died five times and has been brought back each time, thanks to a secret drug called Revive. Revive is the central part of a government programme in which the drug is tested on kids who all died in a bus crash. I don’t know about you, but people being brought back from the dead by a secret government drug? Uh, yes please. When Daisy is relocated to Omaha, Nebraska she makes friends with Audrey and falls for her cute brother Matt. There are a lot of twists and turns along the way and I even found Daisy and Matt’s relationship to be a bit confusing and even frustrating at times. I’ve never been in love (because I’m a loser) but I don’t imagine that being in love with someone would be so difficult. There are parts where Matt refuses to talk to Daisy and won’t even text her and he seemed to be more of the girl in the relationship than Daisy was! The pacing of Revived is quite relaxed for the most part and speeds up in places, especially towards the end when the tensest scene in the book climaxes. When the book ended, I felt like a little part of me had gone missing and I wanted it to come back (clichéd, I know).

I love Cat Patrick’s characterisation and the characters of Revived were incredibly likable  I loved reading Daisy’s narratives and I especially loved her personality. She was lovable but a bit tough at the same time and her fearlessness really make her just that extra bit likable. Although Matt was really cute and sweet most of the time, I didn’t like him as much as I liked Luke from Forgotten. At times he was kind of petty and grumpy and at others he was sweet and charming. Hot and then cold. I would’ve liked to have seen Daisy and Matt’s proper relationship and how that would have unfolded in the story but the circumstances of the events just wouldn’t allow that to happen. Darn…

There are quite a few settings in Revived and I enjoyed reading about each one of them. I’m going to be shameless and admit that when Omaha, Nebraska was first mentioned I mentally said “ooh, that’s where Marlon Brando was born!” If I didn’t have a clue of who Marlon Brando was, I wouldn’t have known about the town or found it interesting.

The theme of death and bereavement was a little bit too heavy for me but once it became more light-hearted, the heaviness was lifted. But, one thing that I wish was expanded on a bit more was Megan, Daisy’s best friend and another programme test subject, being transgender. I wanted to find out a bit more about that but it was only mentioned in passing and wasn’t a big subject.

Despite a few elements that I didn’t like as much as I would have liked to, I really enjoyed Revived. It was nice quick read but a bit heavy at times with great characters and an interesting story. I would definitely recommend!