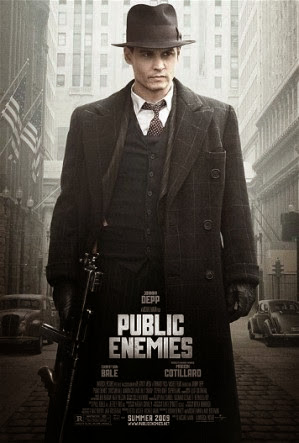 The difficult 1930s is a time of robbers who knock over banks and other rich targets with alarming frequency. Of them, none if more notorious than John Dillinger, whose gang plies its trade with cunning efficiency against big businesses while leaving ordinary citizens alone. As Dillinger becomes a folk hero, FBI head J. Edgar Hoover is determined top stop his ilk by assigning ace agent Melvin Purvis to hunt down Dillinger. As Purvis struggles with the manhunt’s realities, Dillinger himself faces an ominous future with the loss of friends, dwindling options and a changing world of organised crime with no room for him.

I’ve owned this film since Christmas and I didn’t get around to watching it until very recently. Need I say why I wanted to watch this? In case you’re not sure, here’s photographic evidence:

Although the premise of Public Enemies is interesting, I found it predictable. It’s obvious what it going to happen in the end and it takes an awful long time to get there. Obviously not everyone is going to die just fifteen minutes into the film, but it shouldn’t have taken to so long for the end to come round. There is a lot of action and don’t get my wrong, I like my fair share of action, but the gunfight scenes outweighed the drama of the film, which is equally important.

I’m not a fan of Johnny Depp. I never have been and I don’t suppose I ever will be. Despite that, I quite liked his performance as Dillinger. He was suave, smooth, mysterious and just oozed with the swagger of a man of Dillinger’s kind. I think I appreciate Depp a bit more now, I liked how he was able to show both sides to Dillinger rather than just one. He showed how Dillinger was a romantic but he was also a dangerous, cruel person too.

I’m not saying this because I think that he’s hot, but Christian Bale’s performance, I think, was the best in the entire film. I loved his performance as Melvin Purvis. Everything was authentic: the accent, the stature, the attitude. He is first introduced when Purvis is chasing down Pretty Boy Floyd (who is played by an unrecognisable Channing Tatum) and, I’m just going to say it, there is a full view of his butt. Clothed, but still. I couldn’t find a still but I squealed.

The camera work of this film was just awful. It was incredibly obvious to me that a dolly was not used because whenever a character was walking and the camera followed them, the camera would bob up and down for the entire scene. GAH! I can get motion sickness just from looking at something and this was just awful. Sometimes I appreciate a realistic camera look in films, but not if it makes me feel like I’m going to throw up. Not fun. Experimenting with different camera techniques in period films just seems like a huge no-no to me.

The music of this film just seemed incredibly unnecessary at times. The score pops up at the stupidest of times, the worst example being when Billie (Cotillard) is opening a present. It wasn’t even a particularly emotional moment! It just seemed inappropriate to have music playing when it isn’t needed at all. One other thing that bugged me was the use of progressive bluegrass music. I’m pretty sure that progressive bluegrass didn’t exist in 1933.

This film was just not as good as I was hoping it to be. I did have a couple of swoons, but then was when I didn’t feel like I was on a merry-go-round due to the awful camera work. For me, the action and drama were incredibly unbalanced. However, the acting was the one thing that I enjoyed. If it weren’t for the cast (mainly the support lead man) I wouldn’t have even thought about watching this film.