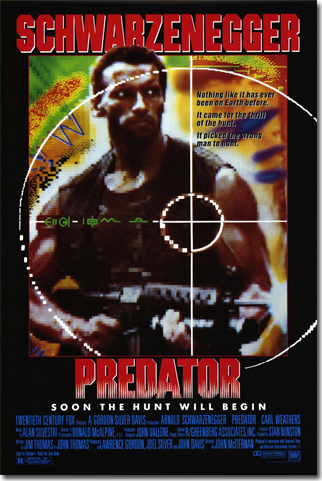 A team of special force ops, led by a tough but fair soldier, Major “Dutch” Schaefer, are ordered in to assist CIA man, George Dillon, on a rescue mission for potential survivors of a Helicopter downed over remote South American jungle. Not long after they land, Dutch and his team discover that they have been sent in under false pretences. This deception turns out to be the least of their worries though, when they find themselves being methodically hunted by something not of this world.

For a long time, there were two main horror movies that I kind of knew that I was too scared to watch: one of them was Alien, and the other was Predator, and it’s all thanks to the AVP crossover franchise. Predator seemed like the tamer of the two, and it’s also got Arnold Schwarzenegger in it, so I went for this one first. And while it’s definitely not the best movie that I’ve ever seen, and I have a few problems with it, I did enjoy this film and would probably watch it over and over again.
The plot of Predator is pretty simple, in action movie tradition: a team of special force ops have to go on a rescue mission to find survivors of a helicopter crash in a South American jungle, who are being held hostage. However, it turns out that there is something hiding in the jungle that is hunting the team and is slowly picking them off one by one. I think that the film was split into two halves: the first half being where everyone is being killed and we can’t see the Predator, and the second half is the final showdown between Dutch and the Predator, which definitely goes into action movie territory, and shifts away from the horror elements. And speaking of horror elements, I wouldn’t exactly classify Predator as a horror movie. This is partly because I wasn’t scared by it, but mainly because this film has much more of an action movie feel to it. There’s lots of explosions, and we even get some classic one-liners from good old Arnie. My biggest issue with the film’s plot is that it’s pretty thin, and at some points just turns into long action scenes with plenty of explosions. I would’ve liked the story to be a lot more fleshed out, but I am glad that it’s fast-paced because Predator is definitely not boring.
My bone to pick with Predator comes with its characters. This film is a total sausage fest. There is one woman in the entire film, and at first she speaks nothing but Spanish, then she doesn’t speak at all, then she speaks very little English with a strong South American accent, and then she goes back to being completely mute. Just what. I can’t even remember this one female character’s name, because there’s so many more male characters who get a bigger part to play than her. Also, there’s a Latino character whose nickname is “Poncho”. What. As for Schwarzenegger, he’s not the greatest actor in the world, and a lot of his hero characters (and by that, I mean characters that aren’t the Terminator) can tend to merge together into one person, but he’s always a pleasure to see in a film like this. He knows how to do action, because action movies can be silly, they don’t have to have top-notch acting, especially not in the 1980s. Another thing I picked up on is that the other characters sometimes feel incidental, and this can really be attributed to the fact that Schwarzenegger is the star of this film. There aren’t any stars in the plural form, just Arnie, and all the attention is on him.
Predator‘s special effects straddled between impressive and dated for me. All the traditional effects, such as exploding heads, skinned bodies, and even the Predator’s armour is really quite impressive, but anything that has been computer generated, is really dated. This is especially evident when the Predator is invisible, because his outline is incredibly obvious. Obviously CGI wasn’t a perfected craft at this point in time, but it could have looked a lot better. The Predator is supposed to be completely invisible, so why can I see the finer details on his armour when he’s ‘invisible’? I actually think that it would have worked better if almost all traditional effects had been used when the monster is invisible, so that you really can’t see him.
Is Predator scary? I don’t think so. To me, the scariest part of the film was when the Predator finally took off his mask and showed us that, in Dutch’s words, he’s one ugly motherfucker. I’d say that this film is more tense than scary. There are a couple of jump scares here and there, but there’s a huge feeling of dread, and it all comes from knowing that the Predator is out there, but you don’t know where exactly he is, when he’s going to strike next, or what he’s going to do. Plus, some of the cheesiness and Arnie’s signature one-liners (stick around, GET TO THE CHOPPER!!!, and even knock, knock) really takes away from the scare factor. Predator is definitely more of an action movie than a horror movie. There’s plenty of explosions, guns, running around, and people getting shot in the head, which is to expect when you’ve got a film with Schwarzenegger in it.
If you’re looking for a cheesy 80s action movie that happens to have a deadly alien in it, then Predator is definitely what you’re looking for. However, if you want to actually be scared and maybe even have your knuckles turn white, you’re better off looking somewhere else. I actually liked Predator, Schwarzenegger is always a pleasure to watch, but I wasn’t expecting it to be so tame. Or be such a sausage fest. But, thanks to this movie I will now be shouting GET TO THE CHOPPER, every time that I’m going to be in a friend’s car. Thanks, Arnie.