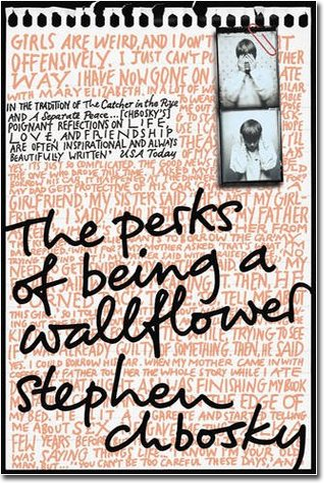 The Perks of Being a Wallflower
Author: Stephen Chbosky
Genre: YA Contemporary
Released: February 1999 by Pocket Books
Source: Purchased
Rating: ★★★★

Charlie is a freshman. And while he’s not the biggest geek in the school, he is by no means popular. Shy, introspective, intelligent beyond his years yet socially awkward, he is a wallflower, caught between trying to live his life and trying to run from it. Charlie is attempting to navigate his way through uncharted territory: the world of first dates and mixed tapes, family dramas and new friends; the world of sex, drugs, and The Rocky Horror Picture Show, when all one requires is that perfect song on that perfect drive to feel infinite. But Charlie can’t stay on the sideline forever. Standing on the fringes of life offers a unique perspective. But there comes a time to see what it looks like from the dance floor.

For quite a long time, I’d been putting off reading The Perks of Being a Wallflower. I just remember that when the film was released, a lot of people went totally nuts in both directions. There were people who raved about it and constantly quoted that one same quote (you know which one I mean), which kind of threw me off a bit. I had no idea of what the book was about and at the time had no intention to, and it wasn’t until recently that I was kind of prompted to give it a shot. I definitely wasn’t expecting this book to be as powerful as it was.

The Perks of Being a Wallflower is told in the epistolary form by Charlie, our protagonist, who is a freshman in high school and incredibly shy. He’s gone from having only one friend in middle school, to having none in high school because his only friend committed suicide in middle school. Then he meets Sam and Patrick, who introduce him to the experiences of teenage life.

Throughout the novel, I had a huge hunch that there was something not right with Charlie’s mental health but I didn’t know exactly what was up until I read the Wikipedia article to refresh my memory a bit (my memory sucks btw). It felt pretty ambiguous to me, and whether that was the point or me just being totally oblivious, I don’t really know. It’s probably the latter since the Wikipedia told me what was up and my reaction was pretty much “No. Way. Oh my God.” Charlie himself is a pretty complex character. Like most people who suffer from mental health issues (please note that I’m not speaking from personal experience, but from what I’ve managed to observe from people I know personally), the smallest things can cause him to cry, and sometimes nothing at all will make him cry. At the beginning of the book, I kind of felt like being stern towards him, but then I remembered that I don’t like it when people do it to me and I felt bad for him during these moments where he was down. I can’t fully identify with Charlie’s experiences. Hell, I probably can’t at all because I’ve never really been in any of the situations he’s been in.

The LGBT themes in this novel come in the character of Patrick, who is gay and has a secret relationship with Brad, a closeted football player. While the novel mainly focuses on Charlie, I felt like the plotline about Patrick and Bad was particularly important because it shows that people shouldn’t be afraid or ashamed of how they really are and that they shouldn’t hide how they identify as a person. I understand that this wasn’t the main part of the book’s story, but it is still very important and I think it could have been developed a bit more.

The Perks of Being a Wallflower is told in the epistolary form, which means that the story is told through a series of letters to an unknown person, who is simply referred to as “friend”. Reading in this form was a little jarring and Charlie’s narration felt a bit monotonous at first, but I did get used to the writing as I continued to read. I’m personally a fan of epistolary forms because they have a very intimate feeling, and this book was probably the most intimate I’ve ever read. It felt as if Charlie really was talking to me, and that made me feel for him even more.

This book made me feel nearly every single feeling that there is to feel. Both good and bad. I loved the complexity of Charlie, but sometimes his realness made it difficult to like him and I think that the LGBT themes in the book could have been explored more, as the idea of being open with who you are is an important aspect, even in today’s society. I would definitely recommend The Perks of Being a Wallflower, but I would advise people to acknowledge that this book can be quite difficult to read, depending on an individual’s circumstances.