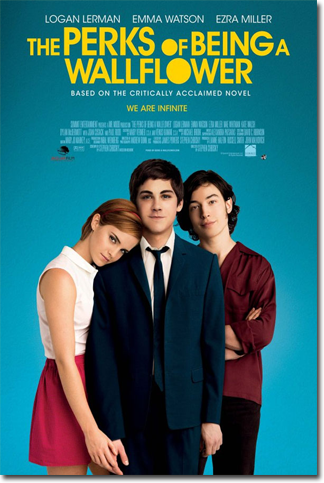 Based on the novel written by Stephen Chbosky, this film is about 15-year-old Charlie, an endearing and naive outsider, who is coping with first love, the suicide of his best friend, and his own mental illness while struggling to find a group of people with whom he belongs. The introverted freshman is taken under the wings of two seniors, Sam and Patrick, who welcome him to the real world.

Want to know what I thought of the novel? Click this link for my review!

As soon as I’d finished reading The Perks of Being a Wallflower I knew straight away that I wanted to watch the film, that I’d stayed away from when it was released in cinemas, simply for the reason that I hadn’t read the book and was apprehensive of reading it at the time. But now that I’d read the book and liked it, I was able to go into the film easily without very many worries, since the film has received mainly positive reviews. And I have to say, I definitely agree with those critics because this is one of the best films I have watched this year.

Since this is the film adaptation of the book, the story is nearly exactly the same. And by ‘nearly exactly the same’ I mean that there are a few big differences that don’t necessarily change the story drastically. The biggest one that stood out to me was Charlie’s siblings being given names and also that they now have a family name, which just isn’t mentioned in the book at all. Obviously, since there is probably not a single film adaptation that is exactly the same as the book, there are small changes here and there, but it didn’t bother me that much. I enjoyed the way that the story flowed in the film, although at first I thought it was moving a bit too fast compared to the book, which goes at a steady pace throughout. There are two parts of the film that impressed me the most: the first tunnel scene and most of the scenes towards the end. With the end scenes, Charlie’s mental health issues were made a lot more clear than in the book, but the scene was still just as shocking. In terms of things that were added in, we get to see a lot more of what goes on in school and also in the hospital, which I really liked to see, because even though the story is about Charlie, we get to see how the story’s events effect the other characters.

I definitely think that the cast members played their characters perfectly. They were all spot-on with their performances and I can’t give them enough praise. While Charlie’s character felt just a little bit different than in the book, I loved Logan Lerman’s performance as him. He really got how introverted Charlie is and how he truly cares for everyone around him, and I think he really nailed it towards the end of the film, especially in the scene where Charlie blacks out after seeing Sam off. As for Emma Watson, I’d never really been a fan of her because I’m not a fan of the Harry Potter franchise, but I loved her performance in this film. Although when she spoke her first line, the accent was a little jarring but I got used to it very quickly and it sounded totally natural. She really fleshed Sam out a bit, and I felt like I knew the character more from the film than I did from the book. I think the best performance in the film is Ezra Miller’s performance as Patrick, which made him my favourite character. We already know from the film that Patrick is loud and open, but in the film he just burst out of the screen and I loved that about him. Ezra Miller has great comedic timing and made Patrick even more lovable.

Just like in the book, there is a lot of music mentioned in the film and it plays a pretty important part at times. And while the music that is mentioned in the book isn’t exactly the same as the songs used in the film I didn’t really mind because I still loved the songs that are used, especially in the tunnel scenes. The song that Charlie, Sam, and Patrick listen to in the book is ‘Landslide’ by Fleetwood Mac (which is one of my favourite songs, by the way), whereas in the film it’s ‘Heroes’ by David Bowie. I honestly think that ‘Heroes’ worked better for the film because ‘Landslide’ is a much softer song and it probably wouldn’t have suited the scene in the way that it’s been filmed. As for the other songs used in the film, while I wasn’t all too familiar with some of them I did enjoy them and felt that they suited the film very well.

Pretty much everybody says that the book is always better than the movie, but I don’t think that’s true, especially not in this case. I enjoyed this movie more than the book, and it’s mainly due to the cast and how they brought the characters to life. And with Stephen Chbosky directing the movie of his own book, he got things right for the vast majority of the time. I loved this film and it’s very likely that I’ll be classing it as one of my favourites from now on.