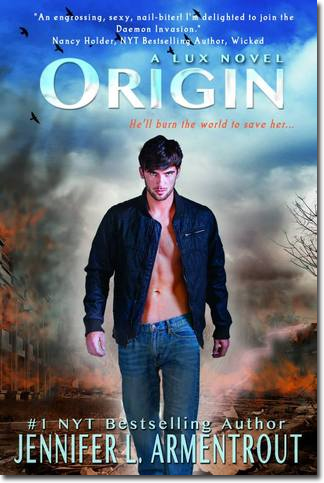 Daemon will do anything to get Katy back.
After the successful but disastrous raid on Mount Weather, he’s facing the impossible. Katy is gone. Taken. Everything becomes about finding her. Taking out anyone who stands in his way? Done. Burning down the whole world to save her? Gladly. Exposing his alien race to the world? With pleasure.
All Katy can do is survive.
Surrounded by enemies, the only way she can come out of this is to adapt. After all, there are sides of Daedalus that don’t seem entirely crazy, but the group’s goals are frightening and the truths they speak are even more disturbing. Who are the real bad guys? Daedalus? Mankind? Or the Luxen?
Together, they can face anything.
But the most dangerous foe has been there all long, and when the truths are exposed and the lies come crumbling down, which side will Daemon and Katy be standing on? And will they even be together?

Guess when I bought this book? When it was released last year. When did I finally get around to reading it? Last week. Yep, I am definitely tardy to the party with this one. And I don’t really feel too good about it because Jennifer L. Armentrout’s Lux series is easily one of my favourite YA series. So far, I’ve been impressed by every single book in the series and I went into Origin just knowing that JLA wouldn’t fail me at all. And although I did enjoy this book, it took me too long to finish and there were a couple of things that I had mixed feelings on (that I will try to keep vague for the sake of spoilers).
Origin is told in a dual point of view from both Katy and Daemon, which was a little jarring at first but I very quickly got used to the format. The story picks up after the events at Mount Weather at the end of Opal, with Katy and Daemon having been separated and Daemon being determined to get her back. I liked how the story is told from both of their points of view, as we get to see what is happening with both of them, because if Origin was in only Katy’s point of view, like the first three books are, it would be pretty stale seeing her doing the same things all the time, or even nothing at some times, so Daemon’s POV definitely brought action to the story. And speaking of action, Origin is definitely more action-packed than the previous books. In fact, it feels like the romance had been shoved out of the way to make way for all of this action that really amps up towards the end of the book. Katy and Daemon are still mad for each other, and I wanted to see so much more of that because I don’t feel like I got enough swoons here. While I’m on the topic of the end of the book, I have a few mixed feelings about it. I don’t necessarily agree with the actions of a few characters (I’m not saying who!) because I thought things were moving just a little bit too fast, even though this is the penultimate book in the series. But, it’s already happened and I’ll just have to deal with it and slightly hold my tongue.
I definitely think that the best part of this whole series is the characters, who are just so awesome and lively and I can’t help but love them (well, bar one but I don’t have to worry about that character anymore). Although I will admit that at times I kind of forgot about Katy, I still like her. She couldn’t exactly do anything about the situation she was in, but she wasn’t sitting around on her butt waiting for Daemon to save her either, which I was so relieved about. In fact, there were times where she thought more of herself than of Daemon, which I would kind of do too if I was stuck somewhere. As usual, her narration has an awesome voice that is so much fun to read in and is both humorous and emotional. Ah, I just love it so much! Daemon, as per usual, is just amazing. I loved being able to read from his point of view, which has such an authentic voice. He sounded very different to Katy, so if it wasn’t made clear who was narrating, I still wouldn’t have known who it was. Daemon is still the same old asshole that we know and love, but this time he became a bit more fearsome. We already knew already that he can be dangerous, but now it’s really emphasised just how powerful and relentless he is in his search for Katy. And while I did say that I would have liked more swoons, the swoons that I did get from Daemon were definitely the best, so that kind of makes up for it. Seriously, this guy just won’t stop being to desirable. And that’s definitely a good thing.
Origin barely takes place in the series usual setting of Petersburg, which I kind of liked but felt a bit apprehensive about at first. It felt weird not being in school anymore, or even seeing Katy’s mum, but I quickly got used to this and started to like it because I guess the characters had to branch out and go to other places sometime soon. I liked being able to see inside of Daedalus, and how all the secret stuff was going down. I always like it when characters are thrust into a setting that is totally alien to them (see what I did there?), because it really stretches who they are, and that really happened with Katy as I feel like I saw her at her strongest, and also with Daemon, as his pursuit really brought out how much he feels for Katy.
Overall, I did enjoy Origin and I’m still looking forward to the final book in the series, but I’m a bit conflicted on how things have happened at the end of the book. I liked the way that the majority of the story played out and the characters were as awesome as they ever were. I’ll definitely be reading the final book, but my one big hope is that the series doesn’t do a huge 180 and end on a bad note, like The Hunger Games did for me *crosses fingers*.