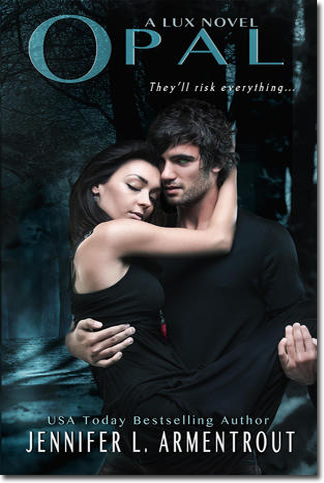 No one is like Daemon Black.
When he set out to prove his feelings for me, he wasn’t fooling around. Doubting him isn’t something I’ll do again, and now that we’ve made it through the rough patches, well… There’s a lot of spontaneous combustion going on.
But even he can’t protect his family from the danger of trying to free those they love.
After everything, I’m not longer the same Katy. I’m different… And I’m not sure what that will mean in the end. When each step we take in discovering the truth puts us in the path of the secret organization responsible for torturing and testing hybrids, the more I realize there is no end to what I’m capable of. The death of someone close still lingers, help comes from the most unlikely source, and friends will become the deadliest of enemies, but we won’t turn back. Even if the outcome will shatter our worlds forever.
Together we’re stronger… and they know it.

I am so in love with the Lux series, it’s insane. Seriously, I had wanted to get so many other books out of the way so that I could read Opal, I was that excited to read it. It doesn’t really surprise me that I liked the book as much as I did – I mean, I finished it in two days and stayed up until 2 AM to finish it. On a Sunday. But, despite how quickly I devoured and liked Opal, I don’t think it’s the best book in the series, for a couple of reasons.

Due to a ma-hoo-sive spoiler that occurs at the end of Onyx and is a main part of Opal, I won’t be summarising the plot like I usually do in reviews and we’ll move straight on to my reactions. At the beginning of the book, I took me a very brief while to get back into the feel of the series, since I had read Onyx quite a while ago. Luckily, it didn’t take me long to do that but I did find the beginning to be just a little slow and it took a while to get properly into the story. Once I’d gotten past the beginning, I did not want to stop. At all. I really liked the way that things progressed; there were very few moments that bored me and I was kept excited to keep turning the pages and continuing on with the story. And then, that ending. That. Freaking. Ending. That was just mean. How can Jennifer Armentrout do this to me? I feel like a piece of my soul is missing, that was so heartbreaking! I need a moment…

My main reason as to why I don’t think Opal is the best book in the series, is sadly down to Katy and Daemon. As much as it pains me to say, certain things they said and did just irked me a little bit. Daemon was protective of Katy before, but now that they’re officially together, he got scarily protective. As in threatening to hurt a certain person if they even spoke to her. No. Just no. Daemon, I get that you really like Katy, she means a lot to you and you don’t want to see her get hurt. But that doesn’t mean that you have to make threats against another person’s life, just because they want to speak to her. Seriously, calm down. I was really , really hoping that he wouldn’t turn into one of those *whispers*Edward Cullen (I sure hope no one heard that) kinds of guys with his overprotectiveness, but thankfully he didn’t. Phew. But the fact that he was inching just that little bit closer worried me a bit. Katy didn’t bother me as much as Daemon did at times, but there was a moment where I wanted to sit her down and tell her what was up. She got jealous over something that had happened a long time ago, that something being Daemon’s past relationship with Ash. I’m sorry, but there is nothing I hate more than when a girl freaks out and is insanely jealous over her boyfriend’s ex-girlfriend. Why? He’s not dating her, he’s dating you, Katy. You also need to calm down!

One of my favourite things about the Lux is that even though it is technically a romance series, we still get a fair share of science-fiction in here, which makes me an incredibly happy bunny. I really enjoyed seeing Katy training with Blake and the Luxen to take control of the abilities she gained in Onyx and also becoming stronger in the process. That’s not to say that I don’t like the more romantic aspects of the series, because I do. Some scenes are particularly interesting, if you know what I mean. Sometimes I found myself rereading certain passages, just to make sure my brain wasn’t playing tricks on me.

Despite my few issues with the book, I really did enjoy Opal. I loved the way that the story flowed and how exciting it was at times and I am still in recovery from that ending. And now to wait for me to gain that part of my soul back when I get to read Origin!