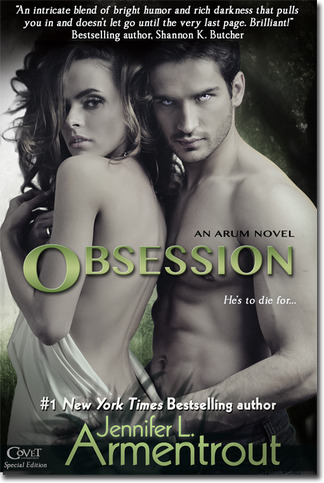 This is a stand alone novel that is an adult spin-off
of the Lux Series. You do not need to read a Lux book to read Obsession and vice versa.

He’s arrogant, domineering, and… To. Die. For.

Hunter is a ruthless killer. And the Department of Defense has him firmly in their grasp, which usually doesn’t chafe too badly because he gets to kill bad guys. Most of the time he enjoys his job. That is, until he’s saddled with something he’s never had to do before: protect a human from his mortal enemy.

Serena Cross didn’t believe her best friend when she claimed to have seen the son of a powerful senator turn into something… unnatural. Who would? But then she witnesses her friend’s murder at the hands of what can only be an alien, thrusting her into a world that will kill to protect their secret.

Hunter stirs Serena’s temper and her lust despite their differences. Soon he’s doing the unthinkable—breaking the rules he’s lived by, going against the government to keep Serena safe. But are the aliens and the government the biggest threats to Serena’s life… or is it Hunter?

It’s not required that you read the Lux series before reading Obsession, but I read the book after I’d read Opal, since that is when the book takes place and I’m weirdly OCD about doing things in chronological order. Obsession starts with what is possibly the most exciting opening I’ve read in quite a while. No, really, one chapter in and shit’s already going down. What better way of opening a book that getting to the point? I really liked how even though we have the two alien species that we know from the Lux series, we see them from a different perspective. Since we’re with Hunter, an Arum, most of the time, the Luxen of Obsession feel pretty malevolent most of the time, which I initially felt quite uneasy about. I didn’t want to dislike the Luxen, but I was growing to sort of like the Arum at the same time and ended up being caught in the middle. Moving on to the more romantic aspects of the book, there is not more that I can say that Obsession gets pretty steamy at times, like ‘open the windows I can’t see out of them’ steamy. My one little problem, however, and this is more of a ‘it’s not you, it’s me’ kind of thing is that I got just a little bit impatient at times. I’m not a fan of when the sensuality builds and builds, and then just completely goes away because the characters have decided against it. However, when that stopped happening, I was more than pleased.

I really liked the characters in Obsession and how they jumped from the page. I loved Serena’s personality, which made her an awesome MC. She was snarky and just refused to take crap from anybody, including Hunter. I also loved how feisty she was and never gave in, not once and I just loved how awesome she was. Moving on to Hunter, I have very little to say other than gimme. I want my own Hunter, and I want him yesterday. Even though he is a jerk at first, I did warm up to him because he’s just really one big tease and he really does care about Serena; he’s not just protecting her so that he can kill some Luxen. And one thing that I won’t say much about, is that I really liked how we see three familiar faces later one in the story (one of them isn’t referred to fully but I knew straight away who it was).

Obsession is told from both Serena and Hunter’s point of view, which threw me off guard a little bit at first but it didn’t take long for me to get adjusted.  Out of the two, I think I liked Hunter’s POV the most, but I can’t put my finger on exactly why I liked his more. I think maybe reading from his POV made him seem more likeable, since if the book was in Serena’s POV all the way through, I mightn’t have liked him as much as I did.

Overall, I really enjoyed Obsession and how it showed a more adult side to the world of the Lux series. I found myself coming back time and time again to continue on with the story and it wasn’t put down for long. Even though this is a stand alone novel, I would like to see more adult ventures into the Lux world!