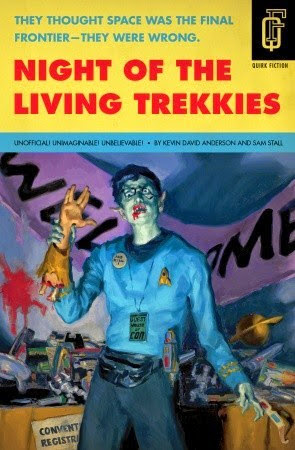 Journey to the final frontier of sci-fi zombie horror!

Jim Pike was the world’s biggest Star Trek fan—until two tours of duty in Afghanistan destroyed his faith in the human race. Now he sleepwalks through life as the assistant manager of a small hotel in downtown Houston.

But when hundreds of Trekkies arrive in his lobby for a science-fiction convention, Jim finds himself surrounded by costumed Klingons, Vulcans, and Ferengi—plus a strange virus that transforms its carriers into savage, flesh-eating zombies!

As bloody corpses stumble to life and the planet teeters on the brink of total apocalypse, Jim must deliver a ragtag crew of fanboys and fangirls to safety. Dressed in homemade uniforms and armed with prop phasers, their prime directive is to survive. But how long can they last in the ultimate no-win scenario?

I had no idea that this book existed until I saw in on an IMM post on one of my favourite blogs. I’d not read nay zombie books before picking this up (zombies have always been a bit too scary for me) but I decided to give it a go; Trekkies eating people sounds awesome!

The cover of this book made me laugh a little; the visitors’ pass says the Wrath of Con (KHAAAAN)! If you’re not too familiar with Star Trek, you might not get it, but I thought it was pretty funny. The cover tells you pretty much what this book is about: a zombie apocalypse at a Star Trek convention. I love the art style, it’s pretty grungy.

The plot of the book is full of suspense and tension, which I absolutely loved. I pretty much devoured this book, I kept wanting to read more and more, to find out what happens next to Jim and his band of Trekkies. The ending has left me wanting to know what happens when it’s all over.If there is a sequel, I will be a very happy bunny.

Moving onto the characters, the characters of this book are all kinds of awesome. I loved how they are initially terrified of the onslaught of zombies but they toughen up and realise that they will definitely die if they sit in a corner and cry for their mothers. Well, not everyone does that, but quite a few do. Even a Klingon. Klingons are warriors.

I have to say, naming the main character after the first two captains of the USS Enterprise was such a bright idea. Apart from his awesome name, I loved Jim’s character. He’s strong but he’s compassionate at the same time. Plus, his decision making is enviable. He definitely has that hero quality and knows how to handle himself in danger.

I really loved Leia. I aspire to be Leia. She was tough but compassionate too, and I thought her “cross-series” relationship with Jim was incredibly cute. I thought it was pretty funny that she was going around a Star Trek convention dressed as Princess Leia in Jabba’s palace. With Enterprise-shaped slippers on because her feet are too big for anything else.

To me, Matt had the perfect level of malevolence as a villain. He started off as just a plain old douchebag, and morphed into a nutcase. At the end I realised, this guy is a full-blown maniac Trekkie. The description of his bedroom in his RV – nicknamed the USS Stockard – had me in stitches, it was too funny. To me, Matt kind of showed the mad side to some Trekkies, he proclaims himself to be a “captain” and that nobody can overthrow him.

Now for the zombies: the zombies were AWESOME. I’ll not spoil how the virus comes about, but I will say this: it blew my mind. I didn’t expect it at all, and if you know what kind of fictional creatures I love, you might be able to guess. But I wouldn’t advise it because it would spoil the story. I’m not an expert on zombies, but the way these zombies were constructed was incredible. A third eye that hunts out prey! How awesome is that?

The setting of the book kind of reminded me of Dawn of the Dead, except that it’s a hotel, not a shopping mall. Either way, they’re stuck in the same place all night with a bunch of flesh-eating zombies. I’d hate to be in that hotel all night, I’d probably be one of the first people to be turned into a zombie; I’m hopeless in emergencies (I had a panic attack in a broken-down lift when I was seven).

I really loved this book; it was funny and gory in all the right ways. I’d recommend this to anyone who loves zombies and like to laugh. I’m still hoping for a sequel!