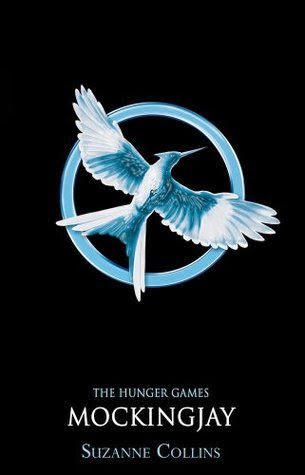 MAY THE ODDS BE EVER IN YOUR FAVOUR

“IF WE BURN
YOU BURN WITH US”
Katniss Everdeen has survived the Hunger Games twice. But she’s still not safe. A revolution is unfolding, and everyone, it seems, has had a hand in the carefully laid plans – everyone except Katniss.

And yet she must play the most vital part in the final battle. Katniss must become their Mockingjay – the symbol of rebellion – no matter what the personal cost.

Going into reading Mockingjay, I was quite excited to see how The Hunger Games series was going to end and I had pretty high expectations. However, I didn’t realise that it would take me so long to read the book and I also didn’t expect to be as disappointed as I was.

The main reason as to why I didn’t enjoy Mockingjay as much as the previous two books in the series is the plot and the events. In my eyes, very little happened until about three quarters the way through. Nothing happening until near the end – or worse, the very end – is my ultimate bookish pet peeve. There was just a little bit too much talk for me and not enough action. I found myself skim reading quite a lot of the time and once the action finally started to happen, I was still skim reading. I got confused at some points and sometimes didn’t realise that certain things had happened.

Over the course of the series, the characters have changed so much that they were different in a way. Katniss seemed weaker to me, and even puppet-like at times because she’s pretty much being told what to do and to me, that’s just not what Katniss does. I was a bit let down by her since she was so strong in the first two books and here it seemed like she’d been crushed a little bit. Many of the other characters had the same treatment, but I did like how Prim had a bigger part to play and came out of her shell.

Although I liked being able to read about the rest of Panem in a bit more detail than the other books, I had mixed feelings about District 13. While it was interesting to read about how militarised the district is and how it has a cold and pressurised feeling to it, it felt quite stale after quite some time and I wanted the story to move away, which it thankfully did.

I felt that Katniss’ narrative in Mockingjay wasn’t as engaging as it was in the previous books. Since the events were quite slow at times, the pacing of the narrative matched it and I just wished for it to speed up. Also, Katniss’ changed personality is shown in the narrative which is something that I felt brought it down. I didn’t really want to read about her feelings and how it is taking an excruciatingly long time for her to make up her mind between Gale and Peeta, I wanted to see some action.

I felt somewhat bad writing this review because I really wanted to enjoy Mockingjay, I really did but it just didn’t do any wonders for me. Mockingjay is definitely not the best book in the series, but I wouldn’t go as far as to say that it’s the worst or that I hated it, because I didn’t hate it. As much as I wanted it to be, Mockingjay wasn’t the spectacular ending that I wanted it to be and unfortunately I was unimpressed for the most part.