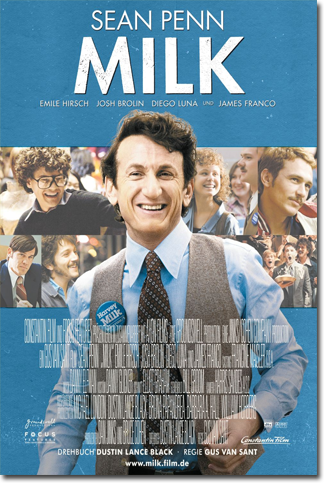 Upon moving to San Francisco from New York City in 1972, forty year old Harvey Milk gains focus in his life as a gay activist in the city’s Castro district. Gay rights activism turns to political activism as Milk decides he can be a more effective voice for the gay community as a politician, elected or not. Through several elections and losses both for a city seat and a state assembly seat, Milk becomes the first openly gay man in the United States to be elected to political office when he wins a San Francisco supervisor seat in 1977. His many political battlefronts include one with the national anti-gay Save the Children crusade, led and fronted by singer Anita Bryant. Closer to home, Milk has a continuing struggle with his fellow supervisor, Dan White, a staunch social conservative.

Before I’d seen this film, I’d only heard of it about once or twice (this was back when I used to watch E! for some reason or another) so I didn’t come across it again until recently when I was browsing Netflix for films to watch for this month. I hadn’t really seen many LGBT films that went down the political route, so I figured that we should get a bit political here. However, like most films based on true stories, I don’t really know all that much about what really happened, so I can’t comment on whether or not the film accurately portrays the true events. Again.

Milk is the true story of Harvey Milk, who was the first openly gay person to be elected to political office in the United States. The story is told in a framed narrative as it starts with and often cuts back to Harvey sitting in his kitchen recording the story of how he came to be an activist. What I found interesting about this is the fact that Harvey had a good gut feeling that he was going to be assassinated and then, lo and behold, eight days after he made the recording, he was killed by Dan White. Sometimes I’m a little wary of framed narratives because they can have a tendency to jump around quite a bit (like it does in Batman Begins) and sometimes they go Inception-style and end up being a story within a story within a story (Mary Shelley’s book Frankenstein does this at one point). Milk, however, does the whole framed narrative thing really well because the story moves in a single linear path, with the occasional cut back to Harvey and it doesn’t jumble anything up at all. I can’t think of a single moment where I was bored or wishing that things would speed up or slow down because everything moved at just the right pace. That’s probably the best way I can describe it: not perfect, but just right.

As a person, I really liked Harvey. As a political activist, I liked him even more. What I liked the most about Harvey’s activism is that it was for everyone. He not only stood up for gay rights, but for the rights of ethnic minorities and senior citizens (I can’t remember about women though) too. And he managed to do this somewhat peacefully (there were a couple of riots but all he asked for were for people to march) and without resorting to attacking people. In my honest opinion, this is how I think activism should be done because it’s definitely not how people do it today (just browse through the social justice tag on Tumblr, and you’ll see what I mean). Moving away from the political side of things, I think that Harvey was a good person. He was friendly, affectionate and generally a really sweet guy. I loved Sean Penn’s performance as Harvey, mainly because it totally wasn’t what I expected of him since I’d only seen Penn play particularly tough guys. And it’s not just Sean Penn, the whole cast was great and really managed to play their parts as people, and not stereotypes.

For a biopic, Milk has some of the best cinematography that I’ve seen in a while. Some of the ways that scenes are shot are incredibly clever and I just loved the way that it was pulled off. An example of this is a scene where Harvey is talking to two cops after a man has died from being attacked. All of the gay men in the neighbourhood had been given whistles to blow whenever they are about to be attacked and the shot in this scene is a reflection in a whistle. There were a few other scenes that were shot in a similar manner and they make the film look really good and kind of stylish.

I loved Milk so much. It’s a beautifully made film that holds an important message that is still relevant today. And here’s something strange: most biopics that are about people who have died make me feel kind of sad. This film didn’t. It doesn’t mourn Harvey Milk, it celebrates his legacy and what he has done for politics and for gay rights activism, which is incredibly important and is something that should be remembered.