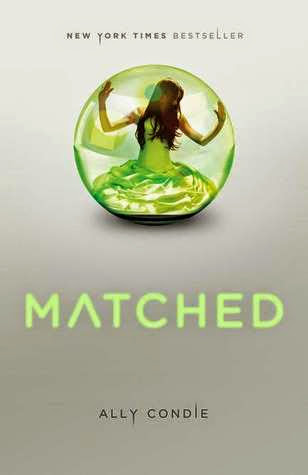 Cassia has always trusted the Society to make the right choices for her: what to read, what to watch, what to believe. So when Xander’s face appears on-screen at her Matching ceremony, Cassia knows with complete certainty that he is her ideal mate… until she sees Ky Markham’s face flash for an instant before the screen fades to black.

The Society tells her it’s a glitch, a rare malfunction, and that she should focus on the happy life she’s destined to lead with Xander. But Cassia can’t stop thinking about Ky, and as they slowly fall in love, Cassia begins to doubt the Society’s infallibility and is faced with an impossible choice: between Xander and Ky, between the only life she’s known and a path that no one else has dared to follow.

I can’t exactly remember where I first had heard of Matched, but I do remember reading the summary and thinking that the plot sounded interesting. So, I borrowed it from the library and gave it a read.

In short, this book wasn’t as good as I had hoped. There were quite a few things that I didn’t like and one of those things was the narrative. I’m not really a fan of present-tense narratives and I would’ve preferred an omniscient narrator to Cassia’s narration. Ky’s status is brought up at the most inappropriate times in the narrative. Cassia could be running on the track and then, ‘Ky’s an Aberration‘. I don’t see what that has to do with the current action!

I guess the only upside of this book, is its plot. I liked the plot of this book, it had potential, but it isn’t told very well. For the most part, the story moves incredibly slow and picks up the pace a few times throughout the book. The ending of the book left me quite disappointed, I didn’t expect it but I just seemed a bit out of place.

If I were Cassia, I would choose Xander over Ky any day. I don’t see what is ‘appealing’ about him. He actually sounds quite boring to me. Usually, I’m a sucker for the mysterious one, but not this “mysterious” one. Xander, on the other hand, is quite charming. To me, he’s the more likable boy.

I probably will venture further into the series and hopefully the next two books will be better than this one.