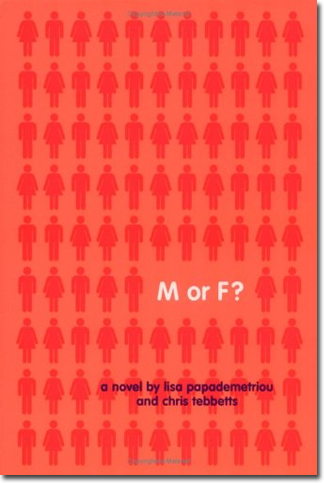 Frannie is desperate to get the attention of her crush, Jeffrey, but too shy to make a move.

Frannie’s gay best friend, Marcus, advises her to get the ball rolling by chatting with Jeffrey online, but Frannie won’t type a word. Marcus takes over at the keyboard, and soon his plan is a success! But the more he chats, the more it seems Jeffrey is falling for Marcus, not Frannie.

Whose romance is this, anyway?

When I was looking for books read for this month, I originally thought that M or F? was about gender identity. So when I read the book’s summary I was pleasantly surprised to find that that wasn’t the case at all (not that I have anything against books that deal with transgender issues; I still have yet to read any) and decided to give it a go, since it sounded pretty interesting. Boy, am I glad that I gave this a go because I really, really, really enjoyed this book. Like, a lot.

M or F? is the story of best friends Marcus and Frannie. Frannie has developed a crush on Jeffrey and wants to get his attention, but is too shy to talk to him, so Marcus (who is gay) helps her out by talking to Jeffrey online for her. However, this plan works a little too well, and it looks like Jeffrey is falling for Marcus, who has been pretending to be Frannie all this time. I really loved M or F?‘s story; it’s light-hearted, funny, and pretty quirky at times. I don’t think I’ve ever read a book with a story like this. My only issue, that isn’t really an issue, is that I wish this story was a little bit longer. At only sixteen chapters, this felt kind of short. However, I felt that it ended at the right place, and if anything was added onto the end, it would feel kind of drawn out. I enjoyed reading M or F? so much that I didn’t want it to end!

M or F? is told from the point of views of both Marcus and Frannie, which I’m usually fussy about, but I loved the way that it was done here. I loved both Marcus and Frannie equally, because they both had great voices that were so much fun to read in. There were plenty of asides, some sarcastic comments were thrown into there and I could definitely tell who was speaking (even though there were little male and female symbols at the top of the page at each chapter) thanks to this awesome concoction. Along with Marcus and Frannie, I liked all of the characters in M or F?; they were all unique in their own ways and I could really get that through the book’s dialogue, which felt so natural and believable that I could hear their voices crystal clearly.

While I haven’t read many LGBT YA romances, what makes M or F? different to other books that I had looked at, is that this is more about friendship than romance and I think that’s why I liked this so much. Sure, Frannie’s crush on Jeffrey is a major part of the story, but this is really all about her friendship with Marcus and how their plan to set Frannie up with Jeffrey changes their friendship. I think that this is what made the book so light-hearted and even humorous because Frannie is comfortable with being so open with her best friend, while she’s shy when it comes to Jeffrey. If she was trying to talk to him all by herself, it would probably feel awkward and I would cringe for her so badly.

Overall, I really liked M or F?. I liked the story, the characters were great, and I just loved how light-hearted and fun this book was. It’s totally not what I expected from a contemporary romance, and I definitely think that’s a good thing.