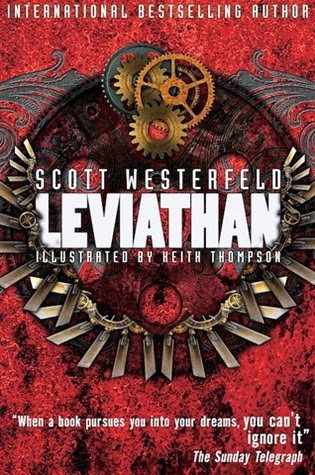 TWO OPPOSING FORCES ON THE BRINK OF WAR
The Clankers, who put their faith in machinery, are squaring up to the Darwinists, who have begun evolving living creatures into tools.
Prince Aleksandar, the would-be heir to the Austro-Hungarian throne, comes from a family of Clankers, and travels the country in a walker, a heavily-fortified tank on legs.
Deryn Sharp, a girl disguised as a boy, works for the British Empire, crewing an airship made of living animals- the ultimate flying machine.
Now, as Alek runs from his own people, and Deryn crash-lands in enemy territory, their lives are about to collide…

Because I’m incredibly awkward and simply can’t skip to the next book in the series, I have re-read this book for review purposes and to calm whatever OCD I have about series.

Scott Westerfeld is possibly my all-time favourite YA author. I love the Uglies series, which is the series that got me into reading YA books on a regular basis and enhanced my love of reading. I originally read Leviathan while at school and it was actually the first book that I eagerly waited for its release; I borrowed it from the library and asked the school librarian if she could get the second book in, but I don’t know if she ever did (either way, it’s too late now because I left school two years ago). I’d spent months and months trying to find the series in bookshops and once I found it, bought the whole series since I can’t just buy the rest of the series without the first one and had to remind myself of what happens in the first book before continuing on in the series. Man, did I forget how awesome Leviathan is.

Leviathan takes place in an alternate version of World War I, where there are two main opposing forces: the Clankers, who rely heavily on steam-powered machinery, and the Darwinists, who use creatures that have been evolved further as tools. Prince Aleksandar, the son of Archduke Ferdinand and Princess Sophie, is woken in the middle of the night by his teachers, Count Volger and Master Klopp, with news that they must flee Austria on his father’s orders in their Stormwalker. While in England, Deryn Sharp, a girl with a dream for flying, disguises herself as boy and renames herself Dylan in order to become a soldier and serve the Darwinist British Empire in the Air Service. When a section of the test she takes goes awry, she arrives on the airship Leviathan and begins her term as a soldier. What I loved the most about the book’s story is that there is never a single dull moment and there is always something lurking around the corner. Even though I had read the book before, I was still surprised by the turns in the story, tense from the suspense and excited by the action. I didn’t feel a need to rush through Leviathan because I was enjoying the book so much and every single word reminded me of why I loved the book so much when I first read it. But this time round, I liked the book even more because I understood the more complicated parts, specifically those concerning the Darwinists. The Darwinists of the book elaborated on Charles Darwin’s original findings of natural selection. They discovered that all living organisms have ‘life strings’ that can be weaved with those of other animals to make newly fabricated creatures which are then used as tools and even weapons of war, like the Leviathan itself, which breathes hydrogen to transport itself and its crew into the air. Even though I haven’t delved particularly far into the steampunk genre, I liked how a little bit of science-fiction was woven into the genre to make it seem incredibly unique. Because I understood many of the parts of the story better than I did when I first read Leviathan, I enjoyed the book a lot more.

I couldn’t help but love the vast majority of Leviathan’s characters, since they’re all just so damn likeable. If I had to pick a favourite character in the book, it would definitely be a tie between Alek and Deryn. I loved Alek because he is trying so incredibly hard to hide how frightened he is by the war and also his sorrow at his parents’ deaths. I just wanted to jump into the book and give him a hug. He might not have accepted it, but whatever; boy was in desperate need of a good comforting hug. I think what I really liked the most about Alek is that despite his status as a prince (a prince with no power nonetheless), he isn’t stuck-up and is a completely genuine person, which made me like him even more and more as the book progressed. Deryn (or Dylan to the book’s characters), on the other hand, is just awesome. I love Westerfeld’s female characters because they don’t conform to how other people want them to be and just don’t have a shell at all. Deryn almost reminded me of myself as I hate wearing skirts and being girly too (if I were given the choice of wearing a dress at a tea party or going up into the air in whatever I wanted, I would pick the last one). I really admired how brave she is compared to the other midshipmen on the Leviathan and every time she thought she would come close to being caught by someone, I was really hoping that she wouldn’t. It was often amusing – specifically towards the end of the book – to see her forget to act like a boy and nearly blow her cover, only to have to remind herself that she needed to be a boy and mutter a swear to herself.

Since I usually talk about settings, I thought it was interesting how Leviathan never stays in just one place. Since both Alek and Deryn are travelling to places, we are constantly moving around with them across Europe, until a crucial part of the novel in which the two stories are brought together. I always like to see multiple locations in books, since just sitting around in one place gets a little bit boring after a while. I haven’t read many books that take place in Europe, so I had a bit of fun seeing how many of the places mentioned in the book I’d been to (I’ve been to four of them: England, France, Switzerland and Germany).

I’ve loved Westerfeld’s writing style since I read his novel Uglies; I’m always able to get a clear and vivid image of what it is that is being described or shown and the style feels different in each of his series due to the vocabulary that is used in the narrative. In Leviathan, Westerfeld uses both new terms that have been created for the novel and also somewhat stereotypically ‘British’ slang when the narrative focuses on Deryn. I say stereotypical because I’ve never said ‘clart’ or blether’ or ‘barking spiders!’ a day in my life and neither have any of the people that I know personally. It might also show the time period, since swearing was obviously a lot milder back in 1914. In terms of descriptions, the descriptions of the contraptions of beasts that we see in Leviathan are just fantastic. Even though there are illustrations present that help out those who may have trouble visualising, the descriptions really let the imagination run free with what the contraptions look like, especially when the Leviathan itself is described. I had a bit of trouble visualising what it looked like at times, which is where the illustrations came in handy for me. I’m usually quite critical of books that are told from two points of view, but because Westerfeld writes in the third-person, the multiple POVs worked incredibly well. I knew exactly who the story was focusing on from the way that the chapters were written. The chapters that focus on Alek are more formal-sounding, which suits his status as a prince, while the Deryn chapters feel looser and use the slang terms that I mentioned above. The way that they’re written definitely makes it easier to follow the focus rather than if the book was written from two first-person perspectives, which would just confuse the hell out of me.

I usually tend to not like books as much as I did the first time that I read them, but Leviathan didn’t fail to blow me away again. Re-reading the book completely reminded me of why I loved it in the first place and it actually felt like I was reading it for the first time, since it had been such a long time since I first read Leviathan. I loved the action, the tension and the characters of Leviathan and am looking forward to delving further into this purely awesome series.