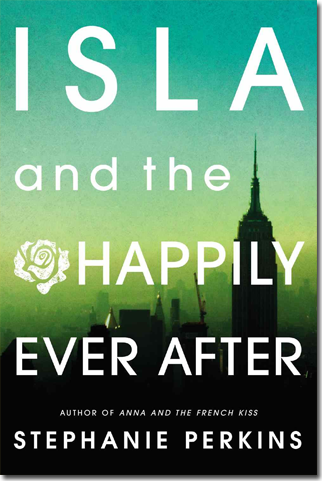 Isla and the Happily Ever After
Author: Stephanie Perkins
Series: Companion to Anna and Lola
Genre: YA Contemporary Romance
Released: August 14 2014 by Dutton
Source: Purchased
Rating: ★★★★
Add to Goodreads | Purchase on Amazon | Purchase on TBD

The café is boiling. The atmosphere is clouded with bittersweet coffee. Three years of desire rip through my body and burst from my lips: “Josh!” His head jolts up. For a long time, a very long time, he just stares at me. And then… he blinks. “Isla?”
Hopeless romantic Isla has had a crush on brooding artist Josh since their first year at the School of America in Paris. And, after a chance encounter in Manhattan over the summer break, romance might be closer than Isla imagined. But as they begin their senior year back in France, Isla and Josh are forced to face uncertainty about their futures, and the very real possibility of being apart.

Want to know what I thought of Anna and the French Kiss and Lola and the Boy Next Door? Click the titles for my reviews!
It’s here! And I finally read it! I had a preorder out on Isla and the Happily Ever After since April, and once the release date actually came around, I was obsessively checking my emails every day for my copy to be dispatched. I absolutely adored both Anna and the French Kiss and Lola and the Boy Next Door, so to say that I had high expectations of Isla, is a bit of an understatement. And while I did love this book, and there are plenty of things that I love about it, I didn’t love it as much as the previous two books in the series.
As with all of Stephanie Perkins’ books, Isla‘s story is incredibly sweet, fluffy, and romantic, which is definitely my favourite kind of romance; however, I got a more mature feeling in this book, compared to Anna and Lola, and I absolutely loved that. Josh and Isla have a pretty harsh reality to deal with, which is that there’s always going to be something that could separate them, as much as we all want them to be together forever. That just doesn’t happen in reality, and I’m really glad that was a big part of the story as it made Isla and Josh’s situation seem just that more real. The reason why I’ve marked Isla down by one star is because at the beginning, to me the romance gave off a bit of an insta-love vibe, and I felt like things were moving a little bit too fast. And by ‘too fast’ I mean we’re already on first dates, kissing, and ‘I love you’s before the book is half over. However, as I continued reading, I did think that maybe the romance moved that fast to make way for the more heavy stuff, but I still had a very faint taste of insta-love in my mouth, and that’s thanks to the fact that Isla has had a crush on Josh for years before the book even begins.
Yay for awesome characters! I think that Isla is another great MC, and I loved her. Initially my biggest fear was that all the way through she would only be concerned with Josh and her relationship with him, and while that is kind of true, she does grow a lot as the book progresses. She learns a lot about how to treat other people, which I think is incredibly important because I’ve seen a lot of people abandon their friends who they’ve been joined at the hip with for years in favour of their new boyfriend or girlfriend, which just isn’t cool. I love it when MCs grow as their story continues, and the way that Isla grows is one of my favourite things about this book. The main thing about Isla’s narrative that I like is that she is a total romantic, but she’s not the kind of “my boyfriend is totally infallible and there isn’t a single thing wrong with him” kind of romantic. She has her insecurities, and while they do get in her way sometimes, she ultimately doesn’t let them immobilise her. As for Josh, I really liked him, but he hasn’t taken Cricket’s place as my book boyfriend (I love Cricket too much for someone else to take his place). I’m not usually one for the brooding kind because in my experience, they usually focus on themselves, but Josh isn’t like that. You can definitely see that he really does care for Isla, and almost manages to forget about everything going on with himself when he’s with her. That’s the main thing I liked about him: for the most part he’s totally selfless, even to the point of risking his own future for Isla. However, one thing that I didn’t like about Josh is that when he and Isla are planning their future together, to me it felt like Josh was the one deciding everything, and Isla just blindly went along with it. A relationship is a team: you can’t always do what only one person wants to do. Another character related point that I love is that we get to see characters from the previous two books, yay! Being able to see so many characters again made me feel so nostalgic, and also seeing some stories come to conclusions was one of the best parts of the story.
The main thing that I absolutely love about Stephanie Perkins’ books is that her work isn’t just about romance. Yes, the romance is a big part of her stories, but there are other important themes there too that you just can’t ignore. In Isla, I got a big theme of friendship and family, mainly with the message that you can’t abandon the people that you’ve always loved, just because you’ve gained a romantic interest in someone. Seeing this nestled inbetween the romance and even a bit of angst in the third quarter of the book just reminded me so much why I love Stephanie Perkins’ writing. Inbetween all your sweetness and fluff, you can still have a heaping dose of reality to make you think, and she does it so well that I can’t help but admire her writing. I love it so much!
Although I didn’t love Isla as much as I loved Anna and Lola, I did still really enjoy this book and would definitely read the whole series again. And again. And again. I liked how Isla’s story felt more mature in comparison, once I’d gotten over the initial insta-love taste that I had at the beginning, and I was pretty much glued for this book. All that waiting was definitely worth it, because this was an awesome light read.