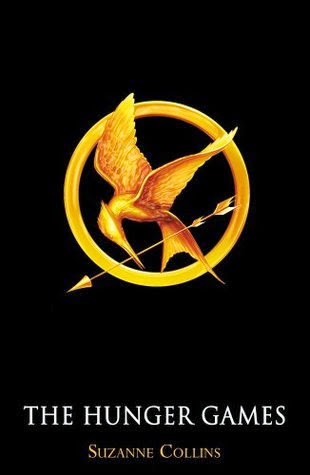 MAY THE ODDS BE EVER IN YOUR FAVOUR

In a dark vision of the near future, twelve boys and twelve girls are forced to appear in a live TV show called the Hunger Games. There is only one rule: kill or be killed.

When sixteen-year-old Katniss Everdeen steps forward to take her sister’s place in the games, she sees it as a death sentence. But Katniss has been close to death before. For her, survival is second nature.

I don’t know why, but I’m always late when it comes to the latest phenomena and I was incredibly late with The Hunger Games. Getting my paws on a copy was a bit of an adventure in itself – I didn’t have any money to buy a copy so I went to the library and they didn’t have it. Then I asked my mam to get it out of the library at work and it is always out on loan so she bought the entire trilogy for me as a gift for getting a good report at college. I love my mammy ^_^

Anyways, I was originally quite skeptical about this book since I’d seen some mixed reactions here on the net; some people loved it and others hated it so I put off reading the book for quite some time. Now the movie is out and I always promise myself that if it is a movie adaptation of a book, I must read the book first.

I am aware that people have been making comparisons between The Hunger Games and Battle Royale but before reading this book I had not heard of Battle Royale so I wouldn’t have been able to make any comparisons. I have a thing for fight-to-the-death stories, they just seem so interesting and exciting to me. The element of this fight to the death being composed entirely of teenagers and being broadcast live on TV made it even more interesting.

The beginning of the book was a bit slow for me what with all of the preparations for the Games. I kind of expected them to just be thrown into the Area, rather than being beautified and coached on interview skills and trained on how to kill each other. Fortunately, the narrative really picks up once the actual Games begin and the violence starts.

Initially, I didn’t really like Katniss. She was quite hard but not really in a good way. To me, she came off as incredibly defensive and I found it horrible that she doesn’t trust her own mother. At the beginning she really needed an attitude change, although I can see why her attitude stunk so bad. Thankfully, her attitude does change throughout the book and I started to like her. Girl is bad-ass! I loved how she only killed when she felt she needed to and I liked her morals. I want to be her, but I don’t at the same time.

WARNING! SPOILERS!
I really liked Peeta; not necessarily loved him but I liked him. I don’t think there was enough of him once the Games began, then there was an awful lot of him near the end. It was really cute how he felt about Katniss but I didn’t like how she rejected those feelings and assumed that it was all for show. For shame, Katniss! The boy likes you and you think he’s pretending.

One character that I grew a little attached to was Rue. It was horrible that a twelve-year-old was in the Games and Rue was incredibly sweet and innocent that I think I died a little inside when she was offed. I’m not a child-friendly person (Rue isn’t really a child but you get what I mean) but I was horrified at how she met her demise and I was glad that her killer was offed straight after.

I hated the Career Tributes. I know that I’m supposed to but they were just so arrogant and cocky that I wanted them to walk into the arena before they were supposed to and be blown up and scraped off the floor.

I would hate to be a citizen of any of the Districts. If I were to live in Panem, I would want to live in the Capitol where everything is cushty and nice. District 12 sounds absolutely horrifying to live in! I come from a mining town and some of my ancestors were killed in mining disasters so I felt like I could relate a little bit to the district, as stupid as that sounds.

I’m not usually a fan of present tense narratives because I find them to be a bit awkward to read (they are to me at least) but it works incredibly well here as the narrative carries a lot of the action and tension. I felt like I was observing the action as it was happening through Katniss’ eyes and went through the Games and preparation with her.

There were a few moments that made me squirm, which is a good thing, especially the tracker-jackers. I’m terrified of wasps and genetically-altered wasps that can kill you by stinging you or make you hallucinate is my worst nightmare (it would be even worse if they were moths). Glimmer’s death made me feel a little bit nauseous and I had to gather myself a little bit.

One thing that bugged me about the narrative is Katniss constantly saying that Peeta doesn’t love her and it’s all for show. I wanted to grab her by the neck and shake her while screaming “HE REALLY LOVES YOU” in her face. By the end I was hoping for them to kiss and make up.

Overall, I think that this book is absolutely amazing. The tension nearly killed me, the violence was, well, violent and some moments made me really squirm. I would recommend this to anyone! Now I’m off to the cinema to watch the movie!