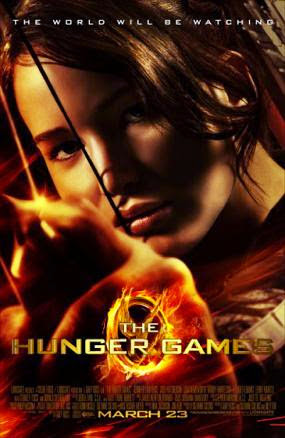 In a dystopian future, the totalitarian nation of Panem is divided between 12 districts and the Captiol. Each year two young representatives from each district are selected by lottery to participate in The Hunger Games. Part entertainment, part brutal retribution for a past rebellion, the televised games are broadcast throughout Panem. The 24 participants are forced to eliminate thier competitors while the citizens of Panem are required to watch. When 16-year-old Katniss’ young sister, Prim, is selected as District 12’s female representative, Katniss volunteers to take her place. She and her male counterpart Peeta are pitted against bigger, stronger representatives who have trained for this their whole lives.

As soon as I had finished the book, I thought to myself “I must see the movie”. So, I grabbed a friend and went down to the cinema to see it!

I’m incredibly glad that the screenplay sticks as close to the book as possible. There were very little differences that I could pick out (I’ve only read the first book so far, I will be moving onto Catching Fire very soon) and they didn’t really phase me but I guess it was done for a reason (Haymitch not being at the Reaping, for example).

I quite liked Jennifer Lawrence’s performance of Katniss. However, she did come off as a little cold at the beginning, which I kind of expected since I found Katniss to be quite cold at the beginning of the book. She did become more human in the more emotional moments of the movie. One thing, just one thing that bugged me a little bit was that at times she seemed to be a little monotonous. Apart from that one little downside, I enjoyed her performance.

I think that Josh Hutcherson was spot-on as Peeta. I loved his stunned reaction at the Reaping, it was just perfect. I can’t imagine anyone else giving a better performance; Hutcherson pretty much was Peeta up there on the screen, instead of some guy acting like him. I can’t think of much else to say about his performance other than that it was flawless!

The majority of the cast was absolutely fantastic; Amandla Stenberg’s performance as Rue nearly had me in tears every time she appeared on screen because I knew what was going to happen. When it did happen, I pretty much had to stop myself from sobbing or I would have gotten a funny look from the fat bloke sitting next to me.

The special effects of this movie are simply breathtaking. Especially the establishing shots of the Capitol. I loved how futuristic the technology looked; it certainly looked a lot better than I had imagined. I also found the makeup to be incredible; I winced at Katniss’ burnt leg because it looked so realistic that it was horrific. However, I was a bit disappointed at the lack of blood. I was expecting there to be a lot more blood but not so much that I had to drag my eyes away from the screen. I can see why there is not as much blood, since this is a 12A rated movie.

I only have one huge negative to say about this movie: wobbly camera. I absolutely despise the wobbly camera technique. I get motion sickness even from just watching something and I had to keep looking away at times because I felt incredibly nauseous. The tracker-jacker scene was the worst for me because the camera flits around so much and then goes into POV shots. I felt like I was going to vomit into my Pepsi at this point.

For me, the score of this movie was the perfect combination of majesty and calm. It was very triumphant and heroic at some points and quite calm and emotional at others. It was incredibly fitting given the moments that the music appeared in, but I wish that there was a bit more music. Some of the beginning scenes felt a bit empty without music.

Overall, I loved loved loved this movie! I would recommend this to everyone, regardless of whether you’ve read the books or not. This is definitely the must-see movie of the moment.