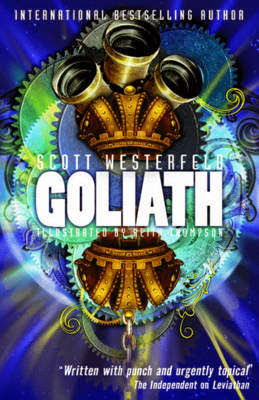 Alek and Deryn are aboard the Leviathan when the ship is ordered to pick up and unusual passenger: Tesla, a brilliant inventor who claims to have a weapon called Goliath that could end the war. But whose side is he really on?

Meanwhile, Alek has discovered Deryn’s secret. Not only that she is a girl in disguise, but that she has feelings for him. Now the crown, true love with a commoner, and the destruction of a great city all hang on Alek’s next – and final – move.

I’ve tried my very best to keep this review spoiler-free, but that just wasn’t happening. Sorry!

Most of the time I’m able to go straight into the last book of a series without thinking much about how it’s the end. That wasn’t the case with Goliath. I had to mentally prepare myself to start this book because I didn’t want the series to end, but then again I couldn’t just not finish it and live the rest of my life asking myself tons and tons of questions and avoiding spoilers (I would’ve just ended up reading the book anyway but a lot further down the line). Once I had steeled myself and almost forgotten the book’s place in the series, I started reading and just devoured the entire thing. I don’t really like to use cliches that much, but this book was a serious roller coaster of feels. My poor feels are still recovering from that ride!

Goliath continues on not long after Behemoth left off, with Alek and Deryn back on the Leviathan after assisting in the Ottoman Revolution, which led to the Ottoman Empire becoming the Ottoman Republic. The airship is making its way across Siberia when its crew is given an order to pick up a passenger in the middle of the wilderness. This odd passenger is the inventor Nikola Tesla, who claims to have  invented a weapon named Goliath, which he thinks will bring an end to the war once and for all and is located in New York, the Leviathan’s last stop before returning to London. While the entire book is incredibly exciting and just plain awesome, what really got my heart pumping with the book’s story is the whole situation that’s going on with Alek and Deryn (who have been bestowed the honour of being my OTP). Alek finally discovers what Deryn really is, a girl in disguise, after seeing disjointed information about “Dylan” and putting the pieces together. To make matters even more complicated, Deryn has feelings for him. And I’m not talking about a little schoolgirl crush, Deryn is in love with Alek, meaning that my dream after reading Behemoth has come true and I can sleep somewhat peacefully at night from now on (I’ll explain the somewhat in a minute).  Every time there was a hint at Alek maybe returning Deryn’s feelings, my heart would just race and I would just refuse to stop reading. (Highlight to view spoiler)The outcome of my wishes and hopes weren’t answered until the penultimate page of the book but that doesn’t matter because it was worth the wait and I couldn’t have thought of a better way of ending the book. Since I have given Leviathan and Goliath the same rating (I gave Behemoth a regular 5 stars), I’ve been thinking about which of the books’ stories I like the most. Both books have incredibly awesometacular stories but my favourite out of the two is definitely Goliath’s since everything is ended just so well, with a superb mixture of awesome action and the odd occasional sweet moment between Alek and Deryn (the last one nearly turned me into a piece of candy, it was so sweet).

There was a lot of character development going on in Behemoth and it sort of still goes on in Goliath, but this time it goes in a sort of different direction. Alek is still becoming braver and knowledgeable as the book progresses, which I really loved because it shows how far he has come since chapter one of Leviathan. It really shows how much he values the friendship that he has with Deryn, since before he went aboard the ship he didn’t have a single friend in the world, just his parents and teachers. I still think that Alek has grown the most out of all the characters in the book because he was the one who was the most unlike anybody that I would encounter in real life: he’s the secret heir to the throne of an Empire at the age of fifteen, his parents have been assassinated in order to start a war, and he had no friends as a child. It’s very unlikely that I would ever encounter a person like Alek in my life. I think his growth was necessary, as it shows how he has to adjust to the ‘real’ world, where he won’t be waited on hand and foot and has to do things for himself. (Highlight to view spoiler) Towards the end of the book, it takes Alek quite some time to realise how he really feels about Deryn, but that’s actually okay because of the way in which he realises it. There’s nothing like thinking that someone’s going to die to help you realise that you’re in love with them! In contrast to Alek getting braver, Deryn actually showed a bit of a softer side, especially where Alek was concerned. Although I really love how Deryn is the awesome female bad-ass of the series, I liked seeing this softer side to her. As cruel as it sounds, I actually liked it when she cried because the full spectrum of emotions that she goes through made her a more well-rounded and believable character rather than being the kind of bad-ass who doesn’t have feelings because “feelings are a weakness”. In reality, even the toughest of people get scared and cry, even if they don’t admit to it. When I finished the book, I didn’t want to let go of the series because I’d grown so attached to Alek and Deryn. I loved seeing them grow and their relationship grow from being allies, to friends, to best friends and finally to more than that. They’re just so precious that I’m not ready to let them go yet!

It’s becoming an established fact that I love my settings and we get quite a few in Goliath! Well, four to be exact. This time, we get to go to Russia, Japan, Mexico and finally, the USA. I love how the entire series takes us to different places throughout its world because it’s really fascinating to see how the cultures of all the different countries use whichever technology it is that they use, be it Clanker or Darwinist. Although much of it isn’t seen, I loved the Japan setting the most because the mixture of culture and Darwinist creatures is the most abundant there, which was just fascinating to read about. I also really liked being able to see how America was a divided country, similarly to how it was in real life back then, but this time with the country being half-Clanker, half-Darwinist. As with Behemoth, these setting were completely new to me since I haven’t been to any of them so I found it quite fun to imagine what they would be like in the book’s world.

I said in my review of Behemoth that I can’t comprehend how awesome Scott Westerfeld’s writing is. Guess what? I’m going to say it again: I still can’t get over how perfect it is! I honestly can’t remember the last time that a book made my heart race to the point that I could nearly hear it and Goliath had managed to do that, thanks to the beautiful and captivating way in which it is written. Everything about the way the book is written is just perfect: the descriptions still had me in total awe of what the creatures and contraptions of the book would look like in the real world and every subtle hint had me completely hooked and wanting to read on and on. I didn’t talk much about the illustrations in my reviews of the previous two books since I didn’t really appreciate them as much as I did until I finished reading Goliath and spent about two minutes looking at the book’s final full-page illustration with teary eyes. Sometimes reading an event in a book isn’t enough for me. Sometimes I need to see that event immortalised even further in an image, which is what the book’s final illustration did perfectly. And, of course, the illustrations are beautiful throughout the series but they seem especially beautiful in Goliath.

Once I’d read the last sentence of Goliath, I was hit by a reality that was about the weight of a ton of bricks: this is the last book in the Leviathan series. Alek and Deryn’s next adventures will probably not be put onto paper and I can only rely on my own headcanon to create my own adventures and experiences for them. I’m not ashamed to say that that makes me kind of sad, but all good things must come to an end. I can always return to the series in the future if I want to, which I can easily say will be quite a lot of times since I’m not ready to put my now ultimate favourite series ever to bed. As much as I didn’t want it to end, Goliath was the perfect way to end the series and it left me more than satisfied thanks to its absolute perfectness. This series has left a lasting impression on me and the way that I know that is that it has completely taken over my brain and is refusing to leave. That is the way that I know how perfect this series is. The last thing I can think of to say in this review is a huge thank you to Scott Westerfeld for creating such an amazing series that will be my favourite for all eternity.