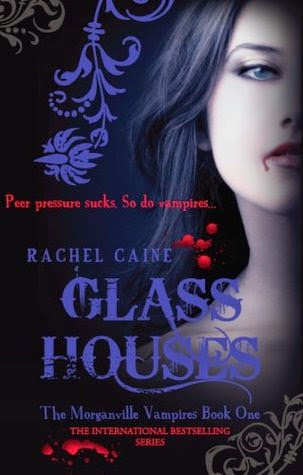 Welcome to Morganville.
Just don’t stay out after dark.

Morganville is a small town filled with unusual characters – when the sun goes down, the bad comes out. In Morganville, there is an evil that lurks in the darkest shadows – one that will spill out into the bright light of day.

For Claire Danvers, high school was hell, but college may be murder. It was bad enough that she got on the wrong side of Monica, the meanest of the school’s mean girls, but now she’s got three new roommates, who all have secrets of their own. And the biggest secret of all isn’t really a secret, except from Claire: Morganville is run by vampires, and they are hungry for fresh blood.

I haven’t been into vampires for quite some time now since I think they’ve been somewhat done to death. I’m not sure why but vampires became a little bit gimmicky for me and that is not a good thing. However, for months and months the Morganville series has been screaming out to me. It think it’s probably because of the shiny bits on the covers and the fact that every branch of The Works that I go into has the entire series on their 3 for £5 deal. I’m cheap and love bargains, so naturally I went for it!

While I did enjoy the book’s plot, I found it quite hard to get through at times and there were also a couple of times where something was mentioned and I didn’t remember it happening. Either I don’t have a good memory or there were some plot holes. It’s more than likely going to be both. However, the premise is a nice change to what I’ve been reading lately and the more exciting moments of the story were those kinds of “HOLY CRAP” exciting moments that I love. The more exciting moments appear near the end of the book and the book’s end was so abrupt it kept me hanging on until I realised that that was in fact the end of the book.

I liked the majority of Glass Houses‘ characters but Claire just rubbed me the wrong way. For a girl who is incredibly smart she seems to be lacking in something important: common sense. If your roommates tell you to not go out at night because you’ll be attacked by vampires, don’t go out! While Claire may have incredibly academic smarts her Morganville smarts appear to be not as incredible. My opinion of Claire changed as the book progressed. At first I felt sorry for her, then slightly irritated by her crying and slight immaturity and then kind of liking her as she became braver at a very slow pace.

Surprisingly, I actually liked the vampires in this book. They were done in a very different way than I’ve seen before and the whole “Protection” concept was very interesting to me. It seemed a lot more like something that vampires would do and even reminded me of True Blood, since the vampires are not hiding away in secret and everyone in town knows about them.

It didn’t feel like Morganville was explored enough to me. Really, there were only three main locations that were explored in detail: the university, Glass House and Common Grounds where Claire’s roommate Eve works. Other places were not seen in great detail or were only described in passing. I would like to see more of Morganville as the series progresses.

I found Glass Houses to be quite a light read, although I did struggle to get through chapters are some points in the book, especially at chapters that were about thirty pages long. I liked the majority of the characters and I felt that the vampires were given a very unique treatment to what I’ve read before. I think I’ll definitely be delving further into the series.