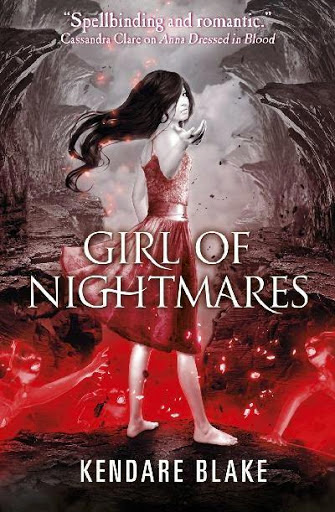 Cas Lowood used to kill ghosts –
until he fell in love with one.
Anna Dressed in Blood sacrificed herself to save Cas’s life – but life without her isn’t worth living. So when Anna begins haunting Cas’s nightmares, he decides to track her down. Trouble is, Anna is trapped in the depths of Hell. And she is not alone.
Just your average boy-meets-girl,
girl-gets-sucked-into-Hell story.

I loved Anna Dressed in Blood. It was like nothing that I had read before and really changed my mind about ghost stories, which I wasn’t really a fan of thanks to my being such a scaredy-cat. I’d been incredibly eager to read the book’s sequel, Girl of Nightmares and even though it sat on my shelf for a while after I bought it, I went into the book expecting greatness and as much blood and gore as the previous book. Although there wasn’t as much, I still did really enjoy Girl of Nightmares.

Girl of Nightmares takes place a few months after Anna Dressed in Blood finished, with Anna in the depths of Hell and also appearing to Cas and looking like she is repeatedly committing suicide. Being the determined guy that he is, Cas refuses to accept the fact that she is gone and tries to find out a way to bring her back. That’s where all hell breaks loose. I honestly found that Girl of Nightmares moved a lot slowly than Anna did and there were moments when I thought the story was dragging a bit and started to skim-read, especially towards the end which I thought took just a little bit too long to get to. I get that this may have been to build tension, but it just dragged a bit and I just wanted some chapters to be over and done with. Thankfully, there weren’t very many that I wanted to just end!

I still love the characters of the series, especially Cas, whose narration is just as awesome as ever. We still get his witty voice coming through which again provides us with both atmosphere for the tense moments and humour whenever it is appropriate. One thing that was different about Cas’ narration that I really liked is that we can really tell whenever he is frustrated or even angry through the words that he uses and the way that the narration flows. Very nice touch. Even though there is a huge absence of Anna herself, it doesn’t really matter since Thomas and Carmel are given a lot of character development. I loved seeing how far they had come since they were first introduced in Anna Dressed in Blood. They really do grow a lot in this book and I don’t think I can give enough praise for that.

In Girl of Nightmares, I thought that there was a lot less ghostly activity going on than there was in Anna Dressed in Blood. Obviously because there is no more Anna to kill trespassers who come into her house, which is also no longer there, but because Cas is so determined to bring Anna back that it almost seemed as if he has given up ghost hunting just for this one dead girl. As sweet as I would like to think that is, I was hoping to see more ghosts. There’s also a lot more inclusion of witchcraft and voodoo in Girl of Nightmares, which as cool as it is, I felt like I was being overloaded by it at some times. I would have liked a little bit more balance between ghosts and alternative magic.

I really enjoyed Girl of Nightmares. Not as much as I enjoyed Anna Dressed in Blood, but I still enjoyed it. The book did hold my attention quite a lot but unfortunately it didn’t hold it all the time and there were a few parts that I skim-read, simply to advance further into the story. There was a lot added to the story, such as the witchcraft, voodoo and also the character development but I wish that there were more ghostly going-ons. But other than those few things, I did enjoy this book and the whole of this very unique series.