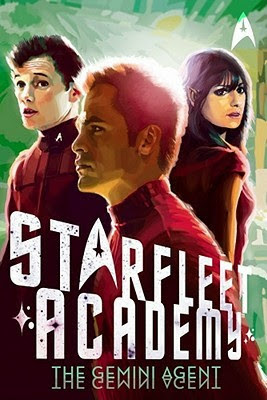 Somebody wants James T. Kirk out of Starfleet Academy.

As first-year final-exams week kicks off, several incident reports with serious allegations against Kirk end up on the Commandant of Midshipmen’s desk. None of the accusations are true, of course… or are they?

Kirk has been plagued by mysterious blackout periods, so he finds the reports difficult to refute. During these blackout  periods, he has no real recollection of what he did, save for some very disturbing and disjointed memories. Kirk has to wonder if the memories are real. If they are, what do they mean? And what’s more disturbing for Kirk, to consider is what if the memories aren’t real? Can memories be planted?

Together with his friends Bones and Uhura, the young cadet Pavel Chekov, and a beautiful Vulcan cadet, Kirk gathers the pieces of a very mysterious puzzle in an attempt to prove his innocence before it’s too late.

The third installation of the Starfleet Academy series, I was quite eager to start reading this one, since the previous book was pretty good. I’ve been quite enjoying this series so far, and I was hoping that this book would follow the pattern of enjoyment. It sort of did…

The plot of the book, to me, took a while to get to. While the main plot was kind of engaging, there were little side-plots here and there that seemed unnecessary, the most unnecessary being a sub-plot containing Uhura and Spock. Spock has no interaction with any other characters and just may as well not even be in the book at all. Also, reading that he looks down at Uhura’s incredibly short skirt seemed incredibly uncharacteristic, even in this universe. Just thought I’d add that.

The main thing that I really liked about this book is the inclusion of Chekov, who is my second favourite TOS character. In the book Chekov is fourteen and just the cutest thing ever. My favourite parts of the book involved Chekov and he was the one character that just made me think “aww” whenever he said something that I found to be particularly adorable.

I liked how in this book, we are taken onto a starship and far away into non-Federation space, rather than just staying in the Academy. I think that pulling the action away from Earth, even for just a little while, gave the book a more of a Star Trek feel, since the series very rarely takes place on Earth.

A main feature of the book is Kirk’s mysterious blackouts and I really liked how they were presented. I really managed to get a feel of what Kirk sees while he’s blacked out through the writing, which gives quite a clear image.

Overall, I didn’t love this book, but I didn’t not like it at the same time. For a book that only has thirteen chapters, most of the action appears in the penultimate chapter, while the rest of the book moves at quite a leisurely pace. I found the end to be a little bit predictable but I loved the inclusion of Chekov.