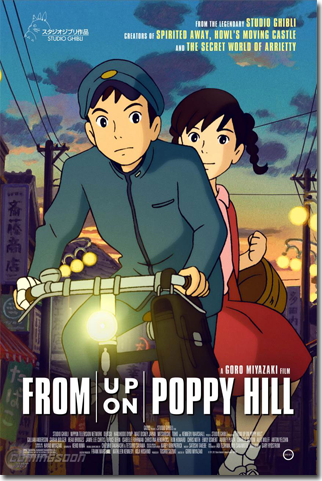 Set in Yokohama in 1963, this lovingly hand-drawn film centers on Umi and Shun, and the budding romance that develops as they join forces to save their high school’s ramshackle clubhouse from demolition.

I recently made a decision to watch every single unwatched film that I have whether it be on DVD, recorded on TV, or saved to my Netflix list and this Ghibli film was the first film that I picked. I actually bought this film at Christmas and I’m surprised that I didn’t watch it until now because I was so excited to see it last year when I saw a sneak peek on Film4 in April last year. I’ve liked pretty much every single Ghibli film that I’ve seen, and I tried to keep my expectations at a reasonable level because Ghibli’s contemporary films aren’t on as epic a scale as their fantasy films, but I do still enjoy them for a different reason. Plus, I have a bias in this film (just read the second name in that mini cast list up there) and that’ll always be a good enough excuse for watching something.
From Up on Poppy Hill is the story of Umi and Shun, two teenagers in 1960s Yokohama, who develop a romance when they join forces to save their high school’s ramshackle clubhouse that a major company has threatened to demolish. I loved how light Poppy Hill‘s story is and it definitely satisfied my taste for fluffy things. The story moves along at an incredibly smooth pace, but it does have a couple of slow moments and even one moment that felt like it came out of nowhere to me. And once the problem in this moment was resolved, it was pretty much not even mentioned ever again which just felt a bit strange. But apart from that, the storytelling has been done very well and I really enjoyed the story from start to finish and how light and fluffy it was. Another thing I liked is that there are other themes to the romance. We also see scenes that focus on friendship, as almost the whole school joins together to protest against their clubhouse being destroyed, and there is also a strong theme of family as Umi hopes for her mother to return from her studies in America and Shun strives to know the truth about his birth. I love it when light stories have more serious themes underneath, and Poppy Hill does that just perfectly.
I am definitely one of those kinds of people who will definitely watch a film if a certain actor is in it, which led me to be surprised by how many people I know of are in this film and I didn’t even realise it until I watched the special features on the DVD. For example, I had no idea that Christina Hendricks, Jamie Lee Curtis, Bruce Dern, and even Emily Osment were members of the cast. No idea at all! But anyways, getting back on track. I loved Sarah Bolger’s performance as Umi, who is an incredibly well-rounded character. I loved how she was kind and caring for everyone around her, and was determined to help the boys in the clubhouse, and at the same time she could have her selfish moments like we all do. I found this in a lot of the characters, which made me love every single one of them. I think this is what I like about Ghibli’s contemporary movies: I like the main characters from the beginning of the film, whereas in their fantasy films that have human characters, I’m usually annoyed by them at the beginning but come to like them as they grow. Okay, now I want to fangirl a little bit and I will also pose a question. Is it possible to be attracted to a voice? I definitely know that it is because I spent 50% of this film just swooning over Anton Yelchin (which I pretty much do with every single film he’s in). We all have our biases and he’s been mine for quite some time no. I can’t help it if he’s attractive enough to make me swoon when I can’t even see his face. I usually don’t say things like this but in certain fluffy scenes, I just couldn’t. I just couldn’t handle those swoons! Anways, fangirling aside, he gave an awesome performance as he does in pretty much every single film that he’s in and made Shun my favourite character in the whole film. For totally biased reasons though. But can you blame me?
As is expected from any Ghibli film, Poppy Hill is beautifully animated. Even though the studio is more well know for their fantasy films, Ghibli has this amazing ability to make everything look magical and that’s why I like their contemporary films as much as their fantasy films. The colours are incredibly vibrant, and this can especially be seen in the scenes that take place inside the clubhouse, which goes from being dark and covered in dust, to being colourful and pretty. I’m a total sucker for traditional animation (I’m honestly sick of the onslaught of CGI-animated films and TV shows these days), and Ghibli has easily the best animation that I have ever seen in film. Every detail is payed attention to, even when things are in the background or slightly obscured. And while I’m on the subject of animation, I occasionally find in English dubs of anime that the voices don’t quite match the flaps (either because of the animation style or the timing), and thankfully this doesn’t happen at all and everything is perfectly timed, which is all down to the way the dub was produced.
From Up on Poppy Hill is just the cutest film I have seen in a looooooooong time. I don’t think I could squee at the film enough, it’s just so cute! I love the characters, the animation is beautiful, and I especially love how Ghibli manages to make even the most ordinary of situations totally magical. Apart from the slow couple of parts in the story, I loved this film and I think this is definitely among my favourite Ghibli films.