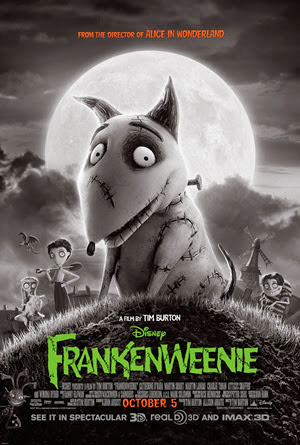 When young Victor’s pet dog Sparky (who stars in Victor’s home-made monster movies) is hit by a car, Victor decides to bring him back to life the only way he knows how. But when the bolt-necked “monster” wreaks havoc and terror in the hearts of Victor’s neighbors, he has to convince them (and his parents) that despite his appearance, Sparky’s still the good loyal friend he’s always been.

I’m not the world’s biggest Tim Burton fan by any means necessary (in fact, before watching this film there were only four Tim Burton films that I liked) but Frankenweenie was the film that I had to see this autumn (everyone else in my house was more excited for Skyfall), not because of the director but because I really wanted to see how this special twist on the classic Frankenstein tale would play out. To show how much I wanted to see this film, I went to go see it alone on my day off from college. I was intensely hoping that I wouldn’t be disappointed by Frankenweenie and I wasn’t disappointed at all. Not one little bit.

Frankenweenie is a remake of Tim Burton’s live-actio first film that he made for Disney and I loved the twists that Burton made to the original Frankenstein story. In the film, young Victor Frankenstein loses his beloved pet dog, Sparky, and figures out a way to bring him back from the dead but has to keep him a secret. Victor’s classmates find out about his experiment and when they replicate it in order to win the science fair, chaos ensues. The thing that I loved the most about the film is how various other monster films are intermingled with Frankenstein, which I found to be quite funny. There were plenty of in-jokes that I was the only person in the cinema laughing at, such as references to Godzilla, Gremlins and even one character being a huge reference to Boris Karloff himself. I loved the humour of the film but if you aren’t familiar with monster movies or classic horror films, you might not understand. Despite the film being a PG, I found a couple of moments to be a little bit scary. I didn’t go see the film in 3D but I do imagine that I would have been more jumpy if I did. There are some kids that are braver than I am, and they might not be as scared as I am.

To me, the cast surprised me. Why? Neither Johnny Depp or Helena Bonham Carter appear in Frankenweenie. Not even in cameo roles. I was actually glad that Tim Burton had decided to work with Martin Short, Catherine O’Hara and Winona Ryder again because I like a bit of variety in a director’s filmography. Anyway, I loved the cast and thought that everyone was wonderful. My favourite characters in the film were Edgar ‘E’ Gore, who is played by Atticus Shaffer (Brick from The Middle), and Mr. Rzykruski, who is played by Martin Landau. Although the character of Mr. Rzykruski was inspired by Vincent Price, I could see similarities between the character and Landau’s portrayal of Bela Lugosi in Burton’s film Ed Wood (my review of Ed Wood will be up next week), mainly with the accent and the way that he speaks. To me, it seemed like Victor and Mr. Rzykruski were among the very few characters in the film that had complete sense and were the most well-rounded characters since they experience quite a full spectrum of feelings. Edgar provided most of the comedy of the film and I think that casting Atticus Shaffer in the role was a perfect move since he always has me laughing in The Middle. I haven’t seen many films that feature the Igor character but I do know that he is an odd character, which Shaffer does so well with his performance and I just loved every minute of it.

This may sound odd, but I’m glad that Frankenweenie was made in stop-motion animation because nearly every animated film that is released today is CGI and I always love it when animators and directors use traditional methods. The stop-motion gives the film a creepy vintage monster movie look to it as does the black and white. I can’t comment on whether the 3D is any good because I saw the film in 2D and I didn’t see it in IMAX either, so I don’t know if that’s any good. You’ll probably have to find that out for yourself!

Frankenweenie‘s music was composed by Danny Elfman, who also composed the music for Batman, Batman Returns, Beetlejuice, The Nightmare Before Christmas and even the theme song for The Simpsons. Dude’s a pretty big deal to me. I loved Elfman’s score, which has the typical Tim Burton feel to it and perfectly captured the feel of the film. Through the song, I knew when I should feel scared, when I should feel happy and when I should feel a bit teary-eyed.

For me, Frankenweenie is one of the best films that I’ve seen this year. I loved everything about it. I loved the animation, the cast, the music; everything was so good! People of all ages would like this film, and, to me, it’s obvious that this film meant a lot to Tim Burton since everything looks like it is done to perfection. I would definitely recommend this film to people of all ages. One of the best films I’ve seen all year!