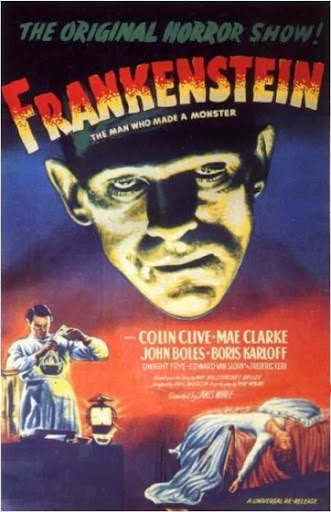 Henry Frankenstein is a doctor who is trying to discover a way to make the dead walk. He succeeds and creates a monster that has to deal with living again.

As I’m writing this review, I’m about halfway through reading Mary Shelley’s classic horror novel and I just had to watch the film version. I just had to! I figured that I may not actually need to read the book to understand but I’ve already read half of it, so at least I’m about to point out any differences.

Although the plot of the film is pretty much the same as the book, there are quite a few big differences, mainly with the characters of Victor, whose name has been changed to Henry, and Elizabeth Frankenstein. As in the stage play that this version is an adaptation of, Henry and Elizabeth are engaged to be married, rather than being adopted siblings. This didn’t make much of a difference to me, as they still care for each other, but in a more intimate manner than in the book. Another big difference is that certain things have been added in. One of these is how the monster is brought to life as the book doesn’t clarify how it happens (Victor doesn’t tell the reader because he doesn’t want his actions to be re-enacted), whereas the film shows the well-known method of using lightning. This was something that I really liked as the audience is able to see how the monster is created rather than it just appearing (I imagine a “scene missing” card being used). If you haven’t read the book or don’t particularly want to, I wouldn’t worry about it because the basic plot of pretty much the same as the book.

Obviously the stand-out performance of the film is Boris Karloff’s performance as the monster. Curiously, Karloff is credited as ‘?’ in the opening credits but his name is given in the end credits. Weird… In the film, the monster doesn’t speak (yet) and is mainly silent apart from the grunts and yells that shows that the monster is distressed. The lack of dialogue works incredibly well because you wouldn’t really want to hear the monster say anything because, in my view, that would make him less scary. Especially since Karloff had a distinctive lisp (a monster with a lisp doesn’t sound very scary to me). I felt quite sorry for the monster at a few times in the film, particularly when he is being tormented by Fritz (a character made up for the film) and when the villagers are chasing him for unknowingly killing Maria. The monster doesn’t have a clue of what’s going on or why the people are mad at him. He’s almost like a child in a way.

There isn’t much in the way of special effects since this is the early 1930s but the make-up used to create the monster is phenomenal. Although the overall look of the Monster is absolutely nothing like Mary Shelley’s character, it is the image that pretty much everyone is familiar with. In a sense, it doesn’t really matter that the monster doesn’t physically resemble the monster in Shelley’s book because, chances are you’d probably imagine him to look exactly how he does here, rather than the translucent yellow skin that is described in the book.

As with Dracula, the only music in the entire film appears at the beginning and end credits or when music is being played by characters on screen. Given that the two films were released in the same year, the reason for not including music will have been the same: audiences were only used to hearing music in a film if there was a reason for it to be there. It has the same effect as the lack of music gives an eerie and unnerving feeling to the scenes, especially the scene in which the monster is seen fully for the first time.

Despite there being numerous changes and things added into the film, I did enjoy watching Frankenstein and didn’t particularly need to read the book in order to understand who people were and what was going on (I’m still going to finish it though!). The cast was excellent, and I absolutely loved Boris Karloff’s performance as the monster. I would definitely recommend this film to fans of classic horror!