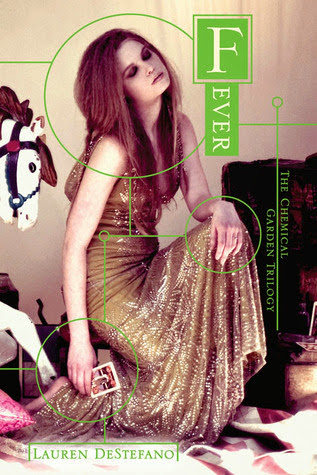 Running away from her forced polygamous marriage leads 17-year-old Rhine Ellery straight into a trap: a twisted carnival whose ringmistress desires the beautiful and unusual Rhine as her star attraction. But with Gabriel – her lover and fellow escapee – Rhine remains determined to reach Manhattan, find her twin brother, Rowan, and start a life far from the gilded prisons that have confined her.

The road to freedom is long and perilous – and in a world where women only live to age 20 and men die at 25 – time is very precious. And worse still, Rhine’s sinister father-in-law, Vaughn, is determined to bring Rhine back to the mansion… by any means necessary.

I’ve been meaning to read Fever for a while since I forgot to buy the book (it’s either that or I refused to fork out about £10 for a hardback copy because I’m cheap like that) but the recent cover reveal for Sever reminded me that I really need to get my bum in gear and read this. Thankfully, my library had it so I tore it off the shelves straight away and took it home.

Fever starts right where Wither left off, so the pace is a bit more energetic, which suited me just more than fine. I loved more than just one setting as Rhine and Gabriel escape to Manhattan, as most of Wither was set in the mansion. I also enjoyed seeing how the world of the series really is and how dark it truly is, in contrast to the world that Rhine longed for in Wither. If I had to pick a favourite part of the book, it would probably be the Carnival scenes, which were insane in just the right way.

Although I liked seeing Rhine and Gabriel together more, there still wasn’t any strong chemistry with them and it seemed like they were both in the friend zone. It appeared to me that Rhine had some lingering feelings for Linden and wanted to be back at the mansion, due to her constant reminiscing about him climbing into her bed and being with her sister wives. I liked seeing Gabriel come out of his shell but while he did that, Rhine appeared to become weaker, to me and I don’t mean just physically.

In Fever there are many more locations and settings than Wither, as Rhine and Gabriel are travelling from Florida to Manhattan. I’ve never been to the US and I have very little of it’s geography but I’m assuming that’s a long way to walk or travel by car. I enjoyed seeing the numerous settings as it made the book feel much more free, whereas Wither felt almost claustrophobic. Throughout the book, there are references to Vaughn, Rhine’s malevolent father-in-law. I felt that these references and even appearances gave the narrative a feel of danger and of fear of being caught. Every time Vaughn was even mentioned I found myself routing for Rhine and Gabriel to complete their mission but I had a bad feeling that they wouldn’t.

I found the writing of Fever to be a bit better than that of Wither. I loved the imagery and descriptive language that was used, especially during Rhine’s dream sequences, hallucinations and when she is drifting in and out of consciousness. I like to have a good image of whatever crazy things a character is seeing and DeStefano captured those crazy things incredibly well.

Overall, Fever is an improvement on Wither but it’s not completely perfect. I enjoyed the dark, kind of hopeless feeling that is present throughout the book but sometimes it got a little bit too much. But, that aside, this is a great sequel and I can only hope that it gets even better from here!