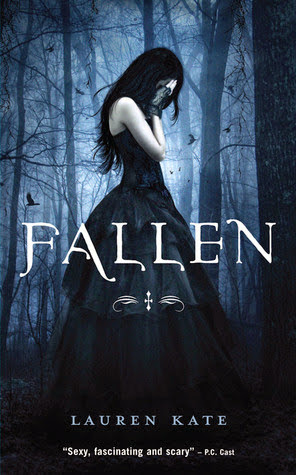 Mysterious and aloof, he captures Luce Price’s attention from the moment she sees him on her first day at the Sword & Cross boarding school in sultry Savannah. He’s the one bright spot in a place where cell phones are forbidden, the other students are all screw-ups, and security cameras watch every move.

Even Daniel wants nothing to do with Luce – he goes out of his way to make that very clear. But she can’t let it go. Drawn to him like a moth to a flame, Luce has to find out what Daniel is so desperate to keep secret…even if it kills her.

I picked up Fallen because of it’s pretty cover. It looks really Gothic and I like Gothic fiction. When I took out the book from the library, I really had no idea of what it is that I was going to read. The blurb is home to probably the most vague summary that I have ever read. It barely says what the book is about so I was pretty blind going into reading the book hoping that I wouldn’t be disappointed. Unfortunately, I was.

Honestly, the plot is what made Fallen a disappointment for me. It’s one of those books where absolutely nothing happens until the end. All filler, no killer. If this book was shorter, I wouldn’t have minded the main part of the part being near the end because it would kind of build up but, seriously, nothing happens until chapter sixteen. That’s really far into the book!

I could not get into the characters at all. Luce left me feeling a little cold towards her, and she was a complete moron. I promised myself I wouldn’t say this but she reminded me of Bella Swan. There, I said it! She knows for a fact that being with Daniel is dangerous, but she pays absolutely no attention to that fact. Does this chick have a brain?

Daniel, was an absolute jerk. I get the fact that being with him is potentially dangerous for Luce, but that is no excuse to be rude to her. I didn’t find him worthy of my swoons or my feels, he’s the kind of guy that I would want to punch in the face for being such a jerk.

Cam reminded me of a guy that I personally know. And not in the “awe, hey he reminds me of that guy” kind of way, more of the “HOLY CRAP IT’S HIM, GET AWAY!” kind of reminded. Seriously, he is such a creepy guy, he nearly freaked me out. Kill it with fire!

I honestly don’t see how the reform school was relevant. Or why Luce was even there in the first place. Even if the book took place in a regular school, it wouldn’t have made that much of a difference. The characters would have stayed the same and the events would have more or less stayed the same too.

The mini-review from P.C. Cast reads “Sexy, fascinating and scary”. Sexy? I didn’t think so. Fascinating? Not a chance. Scary? Definitely not. I almost glided through Fallen but that doesn’t mean that it was a good read.