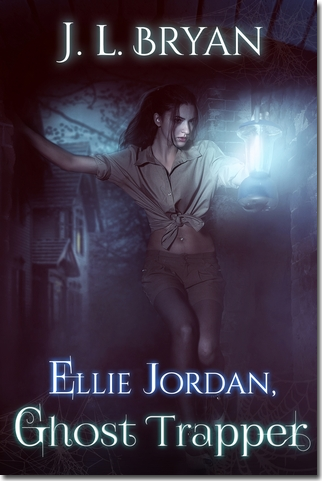 Add to Goodreads | Purchase on Amazon

Ellie Jordan’s job is to catch and remove unwanted ghosts. Part detective, part paranormal exterminator, Ellie operates out of Savannah, Georgia, one of the oldest and most haunted cities in North America.

When a family contacts her to deal with a disturbing presence in the old mansion they’ve recently purchased, Ellie first believes it to be a typical, by-the-book specter, a residual haunting by a restless spirit. Instead, she finds herself confronting an evil older and more powerful than she’d ever expected, rooted in the house’s long and sordid history of luxury, sin, and murder. The dangerous entity seems particularly interested in her clients’ ten-year-old daughter.

Soon her own life is in danger, and Ellie must find a way to exorcise the darkness of the house before it can kill her, her clients, or their frightened young child.

What’s better than private detectives and ghosts? A private detective who deals with huntings ghosts, that’s what. As soon as I got the review request for Ellie Jordan I was immediately intrigued, and even though I was in a bit of a funk when I first read it, I still enjoyed the book, and now that I’ve reread it, I’m ready to give a proper review of this awesome series beginning.

Ellie Jordan follows the titular Ellie Jordan, a P.I. dealing with hauntings, and her assistant Stacey, who have been given the job of investigating a haunting at a former boarding house with a rich history in Savannah, Georgia. However, the ghost they find there proves to not be just a regular ghost who’s playing tricks, and the job immediately gets more serious. Reading Ellie Jordan was a sort of roller coaster experience for me because every time the  book built up to a scary moment, it was like going up the lift hill of a roller coaster. I knew what was coming (not just because I was rereading), but I was still caught off guard once the scare arrived. And I haven’t been spooked by a book like this for quite a time, and that made me realise that I wouldn’t be cut out as a ghost trapper. I really liked being able to see what the ghosts did during the night, and also how Ellie and Stacey monitored it before jumping into action, which was very different to what I’ve seen and read before. Since I’m not well versed in the paranormal or anything to do with ghosts, everything felt very new to me and I felt like I was learning along with Stacey as she followed Ellie’s lead. I don’t think there was ever a moment that I thought ran slow or was boring because I was engrossed all the way through.

My favourite part of Ellie Jordan is definitely the characters: they’re so well constructed and believable that I couldn’t help but love them. Starting with Ellie, I loved reading from her POV and how she has been written is awesome. She’s tough and knows what she’s doing, which doesn’t stop her from doing her job, not even being scared or badly affected by the ghosts she’s trying to get rid of. I did have an initial worry that Ellie was going to be an extremely cold character all the way through the book, but she does open up more as the story progresses, which came as a bit of a relief for me. As for Stacey, I liked how she was obviously new at parapsychology and didn’t know the ropes as well as Ellie did, but she wasn’t an idiot and she learned quickly from both her own mistakes and what Ellie taught her. I also loved the dynamic that the two of them had together; they always had each other’s backs and always supported each other, no matter how hard things got.

A really important part of Ellie Jordan that I absolutely loved is how the method for trapping ghosts and the way that ghosts act is explained in full detail. This was extremely important for me because if the trapping method wasn’t explained I would’ve sat scratching my head all the way through the book wondering how and why things had happened. I also loved all of the backstories surrounding the house and also Ellie herself, but I mainly liked how it wasn’t all just dumped on me in one go, but was instead revealed as the story progressed, which kind of kept me both informed and in suspense at the same time. As for the ghosts, I loved how nasty they got. I’m talking Anna Dressed in Blood and above levels of nasty. These are some of the most hardcore ghosts I’ve ever seen, and the way that they have been written just amazed me. If exploring haunted places means running into these mean ghosts, I’d probably stay outside and wait for everyone to come back.

For a long time I’ve prided myself on not really getting scared or spooked when reading, but that’s mainly because I used to read during the day when there’s light and nothing to jump out at you. The fact that I read Ellie Jordan at night added to the scare factor and during some of the book’s more intense scenes, I found myself itching to turn the lights on because I could feel myself getting really spooked thanks to how the ghosts are described and the imagery that is used. I could really picture how grotesque these creatures could be and I just kept going and going through the story to see what would happen. Even though I was spooked, I just didn’t stop.

Overall, I really enjoyed Ellie Jordan; and after reading it for a second time, I think I enjoyed it even more. I loved the characters, the way that the ghosts are trapped, and most of all, I loved how creepy and spooky the atmosphere gets. Even though I was rereading this time around, I still got spooked while reading late at night. And by late at night I mean around three in the morning, because this was just so good. I’m definitely looking forward to continuing on with this series!