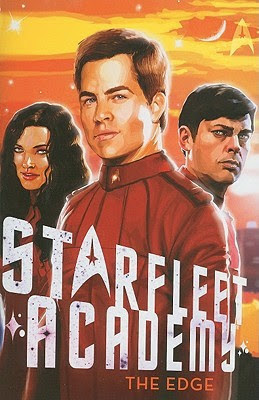 Jim Kirk arrives at Starfleet Academy ready to take on whatever challenges arise. Most new beginning mean you get to start with a clean slate, but Kirk quickly discovers that he is already infamous among his classmates. Thanks to his bravado and boasting that he’ll finish the four-year program in three, they’ve already made up their minds about what kind of rival he is… and how they will beat him.

The Academy’s program is extremely rigorous and uncompromising. The students are the best and the brightest, and the school demands total commitment from them – physically and mentally. Kirk is ready for it all, but he didn’t expect that some cadets will do anything to ensure they succeed at the Academy, no matter the cost.

He soon finds his best friend, McCoy, is one of the main suspects in an Academy misconduct investigation for crimes that could cost the lives of his classmates. Kirk is determined to clear McCoy’s name and unmask the dark side of Academy life – before it’s too late.

I bought this book pretty much straight after reading the first book in the series and my initial expectation would be that it would be better than the first, which was okay. It’s an understatement to say that I like Star Trek and I was really hoping that it would be pulled off incredibly well here.

I really liked how the story of The Edge was more related to life on campus and what happens to the students there rather than something that is happening off-campus like in The Delta Anomaly. It seems to make more sense to centre the story around the Academy itself and not something that has completely nothing to do with the Academy. I enjoyed how the story focuses on all of the characters, rather than just one or two. It was nice to see what was going on with everyone.

In this book, the characters were written much more accurately. I liked how Kirk has a different girlfriend in this book, which is similar to how he has tons of love interests in the series. I’m wondering if a different girlfriend each book is a running thing in this series. I really loved how Uhura’s personality was that of Zoe Saldana’s version, rather than Nichelle Nichols. I like her better. Oh, and there’s also more Spock in this book. Yay!

What I thought was a major theme in this book was competition and it really fits in with the whole Academy atmosphere since everyone wants to be the best. It is also the main cause of the dilemma of the book, which I thought all tied together very nicely.

Overall, I preferred this book to the previous in the series. It felt more like it took place in an Academy and the characters were written much more accurately.