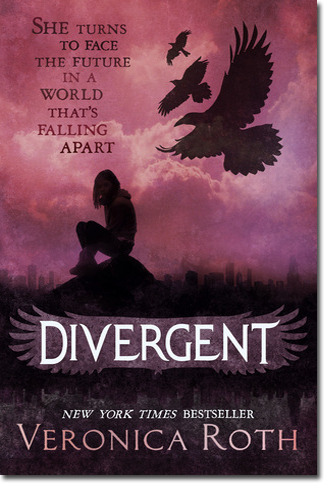 Three flying birds…
One for each member of the family I left behind.
Sixteen-year-old Tris is forced to make a terrible choice. In a divided society where everyone must conform, Tris does not fit.

So she ventures out alone, determined to discover where she truly belongs. Shocked by her brutal new life, Tris can trust no one. And yet she is drawn to a boy who seems to both threaten and protect her.

The hardest choice lies ahead.

I’d seen the Divergent series floating around the blogosphere quite some time back, but I never really payed much attention to it until it became hyped up recently, due to the film being released. Naturally, I had to see what all the fuss was about and got myself a copy of the first book in the series. I actually DNF-ed Divergent at first, but promised myself that I would come back to it later. And while I’m glad that I did pick the book back up and continued reading, I wasn’t exactly wowed, like I expected to be.

Divergent is set in a world where every person is sorted into a ‘faction’ based on their personality traits, for reasons that were so vague I can barely remember. These factions dictate how an individual dresses, acts, and even thinks in order to fit in with each other, and any person who does not fit into any faction is ‘divergent’, which is incredibly dangerous for someone to be. Tris, our heroine, chooses to leave the faction she was born into and transfers to another, which is a stark contrast to the routine life that she lived before. Although I did enjoy the book’s story, I found it incredibly difficult to get into. The first quarter of the book moves at a near snail’s pace, which is what caused me to put it down. However, when I came back I soldiered on through the more boring parts of the book and things definitely got a lot more exciting. As for the end, however, I’m very on the fence about it because it just came out of absolutely nowhere. There were little clues leading up to it happening, but I just didn’t expect it at all (it was almost like Mockingjay all over again).

Divergent‘s characters were what I liked the most about the book, especially Tris. Most of the dystopian heroines I’ve seen usually start out being a little bit on the tough side and grow to be even tougher. Tris, on the other hand, started off being more complacent due to the way her faction raised to be, and grew to being stronger and stronger, thanks to all of the bullshit she has to put up with from other people in her new faction. And I don’t like to use this word too much, but she was definitely a strong MC. As for the other characters, I either liked them, or wanted bad things to happen to them. That can definitely be said for Peter, who was probably the biggest scumbag I have ever seen in a YA book. If I’d ever met the guy in real life, I would definitely act out violently towards him. As for Four, I liked him, but I feel like I’ll probably like him more as the series continues. I realise that he is supposed to be a mysterious person at first, but he constantly went from hot to cold so much that at times I didn’t know what to think of him.

While I did find the world of Divergent to be quite interesting, I thought that the world building was quite poor. We’re just dropped into this society of factions and rules that these factions have to adhere to and the choosing ceremony, with little to no explanation of why the world is this way. I was told by a couple of friends of mine that we’re not told because the point is that apparently the characters don’t even know. Even if it is intentional, that doesn’t mean that I have to like it, and I didn’t. I’m pretty sure that introducing the world and why it’s so shitty is a highly important component of the first book of a dystopian series. At times I was left feeling confused and asking far too many questions.

As much as I like Tris, and this is going to sound a little strange, I liked her more in the dialogue than when she was narrating. There were times when I was relieved to see dialogue because the narration had a tendency to get bland at times, especially when there was something not particularly significant going on. I think this is what led me to DNF Divergent the first time; the lack of things going on, being confused, and then a not particularly engaging narration made me skim read at times, but thankfully it got better the more I read. I liked the way that dreams and simulations were described, as they really gave a vivid image of what Tris could see was happening. I know I’ve pretty much contradicted myself, but this is the best way that I can say how I felt.

Overall, I liked Divergent, but I think that I could have been better. Although the characters and story were great once I’d managed to fully get into the book, the world building was quite poor and almost non-existent. There were far too many questions that I wanted to be answered, which I don’t think is a good thing for the first book in a series. Hopefully things will be explained further on into the series, which I will be continuing on with.