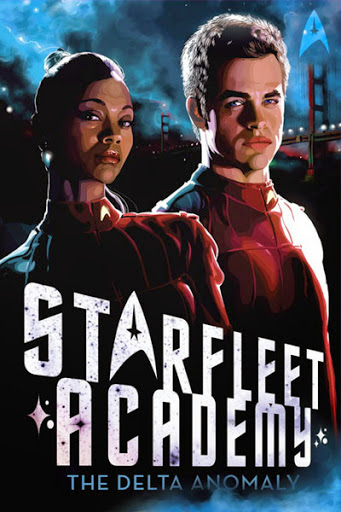 After a rough week at Starfleet Academy, James T. Kirk and his friends blow off steam at San Francisco’s hottest new club. Their good times come to a screeching hault, however, when one of the cadets is attacked by someone who seemingly appears out of thin air.

Bones and his medical team save the cadet’s life, but they uncover the horrifying consequences of the attack. Meanwhile, Starfleet’s investigation reveals the assailant is actually a brutal serial killer from the past – a mysterious entity known only as the Doctor. Who is the Doctor, and why has he returned after disappearing more than twenty years ago?

At the urging of Commander Spock, Cadet Uhura is called in to help decipher a chilling message from the Doctor. Spock has no idea that by enlisting Uhura’s help, he has placed her firmly in the Doctor’s sights.

Before long, Kirk, Uhura, and Bones are caught up in the Doctor’s dangerous web as they race against time to stop the killer before he strikes again.

It’s quite shocking for me to not know that this existed! When I first saw this book in my local W.H. Smith’s, I gave myself a mental slap on the wrist for not finding this two years ago. I didn’t have enough money when I first saw it, so I took to Amazon for a copy (ah, good ol’ Amazon).

The plot of The Delta Anomaly unravels at quite a slow pace; the main events and villains are slowly revealed. I liked how Barba has written a Star Trek story that young adults and teenagers can relate to, compared to in the series when the characters are adults and face some rather “adult” situations. The story has a tendency to speed up and slow down a lot, but I liked this strategy as it kept me going to the big climax of the book, which occurs right near the end.

The book definitely feels like Star Trek to me, but a lot younger because obviously the characters are younger and say and do things that they would never do or say later on in life. For example, I highly doubt that Bones would give Kirk high fives and call him “man” in his thirties. That was a little out of character for him. I loved the minor “college” elements of this book – studying in coffee shops, playing pranks on other students, that sort of thing – it felt that something I would imagine going on with Starfleet Academy’s more easygoing cadets.

Apart from a few out-of-character moments from Bones, I think that the characters were written very accurately. It didn’t feel like I was reading a book with characters who happen to have the same names as Star Trek characters but are nothing like them, because they were written so well. However, I was disappointed in a lack of Spock, but I know why he isn’t featured as much as the other characters (he’s not a cadet in the Academy at this point, he’s a Commander). That’s just my inner fangirl getting in the way.

Although the book isn’t set in space, I still liked the setting of San Francisco. I liked how futuristic the city is described to be, while it still retains its traditional beauty. I’m not familiar with San Francisco at all but I got a really good imagining of how the city would look like in the 23rd century.

Overall, this felt a bit like an episode to me. An enjoyable episode, but certainly not an amazing one. I quite enjoyed this book and its action (despite its lack of Spock), and I will definitely be continuing on with the series!

P.S. I’m really sorry for the poor quality of this review; I’ve been reading very little for the past week due to exams and I stopped right in the middle of this book.