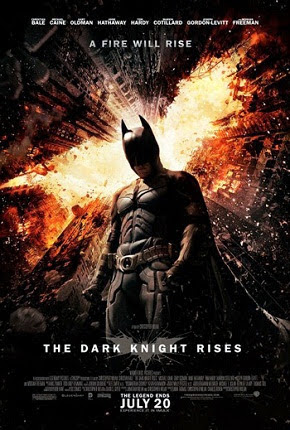 In the final part of Christopher Nolan’s Dark Knight Trilogy, Batman must face a foe unlike any he has ever faced. In The Dark Knight, Batman saved Gotham, but could not save himself, as he ultimately had to take the blame for Harvey Dent’s crimes, and began being hunted by the Police, and thus had to leave the task of protecting Gotham in Gordon’s hands and the superb job that Gordon did in finally bringing peace to Gotham, after what seemed like ages, was enough to convince the Dark Knight that Gotham was safe and that Bruce Wayne need never put on the Batsuit again. However 8 years after the events of The Dark Knight, an unknown foe emerges, and threatens to destroy Gotham.When the foe proves too much for Gordon to handle, Batman must break his 8 year exile and return to defeat Bane from fulfilling his devious plan and claim his rightful place as the true Savior of Gotham.

I think it’s fair to say that I’ve been waiting quite a long time for this film to come around. Four years to be precise. I love Batman, blah, blah, blah, you get the gist of that part. But there was one part that I was not thrilled about at all: Catwoman. I really don’t need to explain why but I was hoping that Anne Hathaway would convince me otherwise about Catwoman and make me somewhat like her.

For me, the story of the film moves at an incredibly slow pace for the first half when everything is being established and set up. Thankfully, things move faster during the second half, when all of the action beings. I liked seeing scenes that mirrored those of scenes from comics such as Knightfall, No Man’s Land and The Long Halloween which I feel really fleshed out the story and connected things together. However, the ending didn’t do anything for me. I thought that the ending was a bad way to end a series of epic proportion. It just seemed a bit lazy to me and even left me frustrated to the point that my head-canon couldn’t do anything to make it better. I was disappointed.

Unfortunately, Anne Hathaway didn’t convince me to like Catwoman. I still hate the character and I honestly think that Hathaway was miscast. She wasn’t sexy, there was no sizzle and her chemistry with Batman/Bruce Wayne was quite bad. Sparks did not fly and I found their more intimate moments to be incredibly uncomfortable to watch. I hate to say it, but I didn’t particularly like Hathaway’s performance and I really wanted to.

Although I really liked Tom Hardy’s performance as Bane, there was one big downside to it. The voice. What was going on with the intonation and accent? It was all over the place. Bane is supposed to be a menacing villain, he’s incredibly imposing and whever I read his speech, he certainly doesn’t sound like an English dandy to me; mainly because Bane is supposed to be South American. Other than that downside, I really enjoyed his performance, it was a very different take on it and showed who Bane really is since Joel Schumacher’s crapfest Batman and Robin turned him into a mindless henchmen rather than an intelligent terrorist, like he really is.

From the start, there was something about Marion Cotillard’s character Miranda Tate that just unnerved me and as the film progresses, I realised that she is yet another character that I hate. When did I realise this? When a certain someone whose name has been pronounced completely wrong shows up. Two characters that I don’t like in one film: what a lovely surprise.

The stuns and special effects is definitely the best part of the film. I didn’t see the film in IMAX (too expensive) but I kind of wish that I did because seeing the action scenes on a bigger screen would have really enhanced the experience for me. I really loved the new addition to Batman’s vehicle collection, it is epic and even has a completely fitting name: The Bat.

The signature score of the series isn’t heard until about half-way through the film but the music before that point is still commendable. Even though it isn’t technically the “theme song” of the film, it is still instantly recognisable as Hans Zimmer’s work if you’re familiar with film music conductors like I am.

In all honesty, this was not the perfect ending to an epic series. In fact, the very end was disappointing. But, putting the negatives aside, I really enjoyed the film. The action was incredibly memorable, I loved most of the characters and acting was top-notch. Like I said, not the perfect ending, but it was commendable despite its end scene. Next stop, Man of Steel!