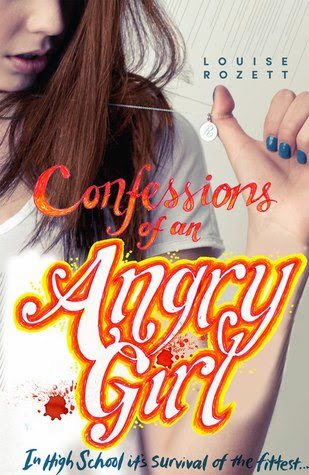 This is a story about ROSE.
About the occasional panic attack and being fourteen in the suburbs without a mobile phone.

READ IT
AND WEEP
Rose’s first year at Union High isn’t exactly going to plan. Her family’s broken, her supposed best friend’s going boy crazy and Rose is so far behind socially that she might as well be moving backwards.

Until her brother’s friend Jamie offers her a ride home – and a way into the world of his popular clique – if only it weren’t for his perfect cheerleader girlfriend. Now Rose is learning how to climb the wobbly high-school social ladder, while struggling to hang on to what matters the most…

I’ve started to give the contemporary genre a chance! I’m not really a contemporary person as I’m much more into unrealistic fiction, but since I’ve been reading quite a lot of heavy unrealistic stuff lately, I wanted to read something a little bit lighter and Confessions of an Angry Girl seemed like a perfect way to give myself a break from fantasy. This is one of those books that I saw ages ago and added it to my to-read list, only to forget about it until coming across it in a store. Because I don’t tend to read contemporaries, I hadn’t read any books about someone being plain angry and even though the concept may sound quite simple, I was interested by Confessions and decided to see what it’s like. I managed to get through the book quite quickly, and I wasn’t disappointed by the book.

Confessions of an Angry Girl introduces us to Rose, who is our titular angry girl. Rose has just entered her freshman year in high school and it’s not going so well; her family has drifted apart following her dad’s death in an explosion and her brother moving away to college while her best friend seems to only care about her boyfriend and her precious cheerleading squad, leaving Rose by herself quite a few times. Confessions is probably the shortest book that I’ve read so far this year with 21 chapters, but that doesn’t retract or add to how much I liked the novel’s story.  This is one of those books that invoke a sort of sense of nostalgia in me because I am able to relate to the majority of the events that happen in the book (apart from losing a parent and getting involved with someone else’s boyfriend). I really enjoyed reading the story and I always came back to the book wanting to find out what would find out next and how Rose would react to things that were thrown her way. My one problem is that Rose’s pent up anger doesn’t really come out in full until near the end and when it does, it’s quite abrupt. I wish I could have seen more of that and hope that I’ll get to see more of it in the next book.

I think the characters of Confessions contributed greatly to my liking of the book, especially Rose. I really liked that Rose had plenty of good reasons to feel the way that she did, rather than just being angry for no particular reason, like many of the characters seem to think. Her reasons for being angry made her feel more and more like a genuine person that I can relate to, especially when she is being harassed at school by Jamie’s nasty bitch of a girlfriend Regina. I went through the exact same thing when I was at school but not for the same reason as Rose does. Throughout the entire book, I tended to take Rose’s side, not because she’s the protagonist, but because most of the time, she was right and I actually got frustrated with the other characters, which, bizarrely, is a good thing because that’s probably what the book wants me to do.

Confessions is told from Rose’s point of view, which I really liked.  I loved how Rose’s personality really shows through and at the points of the novel in which she is really angry, you can really tell how angry she is, through the way that the narrative is worded. Another couple of things about the narrative that I like are that Rose’s love of words is shown and also the humour of the novel. I wasn’t expecting the book to have any kind of humour in it at all but I did find some parts of the book and some quotes to be quite humorous.

While I did enjoy Confessions of an Angry Girl, I do wish that Rose was just a little bit angrier since up until the end she just seemed to be really pissed off rather than full on furious with everything, as the title led me to believe. But, that aside, I really did enjoy this book, I enjoyed its story, characters  and humour so much that I’m glad that I’ve started to read more contemporaries.