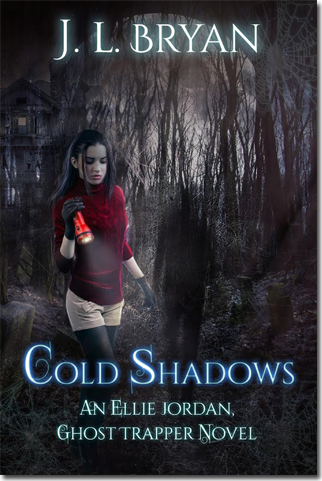 Add to Goodreads | Purchase on Amazon

Footsteps in the attic. Toys that play by themselves. A dark presence in an upstairs room.

Paranormal investigator Ellie Jordan faces a difficult new case. Her new clients are a family haunted by multiple ghosts and a poltergeist that wrecks their home at night. Their seven-year-old son’s invisible friends may not be imaginary at all, but the restless spirits of dead children.

To clear her clients’ house of the dangerous entities, Ellie must unravel the mysterious deaths of another family who lived in the old mansion more than a hundred and sixty years ago—and she must do it before the ghosts can carry out their malevolent designs on her clients and their children.

I really enjoyed Ellie Jordan, so it’s no surprise that I wanted to jump into Cold Shadows as soon as I possible could: I was just desperate for more crazy ghosts and more scares. Going in, I had a good feeling that I was in for a good time and that good feeling was definitely right.

Ellie and Stacey’s job in Cold Shadows is to rid a family home of multiple ghosts and a poltergeist that are making their lives a misery. I think I liked this case more than the previous one because I got to learn even more about the kinds of ghosts there are and how powerful they are. I didn’t know anything really about poltergeists before reading this book other than that they’re the pests of the ghost world, so getting to see the lore surrounding them being more expanded on was a great addition for me. Something that I really loved about the story and the case is that it just doesn’t get any easier for Ellie, with more and more things getting added on top of one another. I could really feel for Ellie and wanted her to succeed, but also at the same time I wanted to see her get pushed to her limits, which I did get too. I think my favourite part of Cold Shadows is how the clients play a bigger part in the story than the family in Ellie Jordan. Instead of being just clients, they were more of a component in the case than they realised and were seen a lot more often.

Speaking of characters, I still love Ellie, and, again, I’m glad that I was able to see her become more open and grow as a character. She still has a hard exterior, but she has let her guard down since the previous book, and continues to gradually let it down so that she can let other people into her life. While I do like bad-ass ghost-trapper Ellie too, I like seeing this side of her more because ti shows that she is human after all, and is capable of showing more emotions. As for Stacey, I would have liked to have seen a little more of her, but in the moments where she was there, I still loved her personality. She’s bright and bubbly, and she’s still learning things and applying them as she goes, and I thought her crush on Jacob was kind of cute. I sort of saw it coming, but it was a bit cute. Going back to what I said about the family being more present, I especially liked Juniper. At first I expected her to be a typical bratty 13-year-old girl in the early stages of a goth phase (I used to be like that), but she turned out to be so much more, and I thought she was an awesome character. As for Crane, I got pretty disturbed by him, especially towards the end of the book. I got frustrated by him, then freaked out, and then finally really felt sorry for him because he’s only a kid who doesn’t know what he’s doing or what’s going on around him.

Although the setting of Cold Shadows is another haunted house, I think that it still worked because it wasn’t just one part of the house that was haunted, although it looked that way at first. This time, the entire house and even the back yard are haunted, due to the multiple ghosts there. Because of this, there is literally no safe places in the house for anybody to run to, other than down the street and away. I loved how the entire house was haunted because it lead to a bigger sense of dread and suspense that was tough to shake.

Overall, I really liked Cold Shadows, maybe a little bit more than I liked Ellie Jordan. I loved seeing the characters grow, and the ghosts became more powerful. I’m really hoping that this streak continues on in the next book!